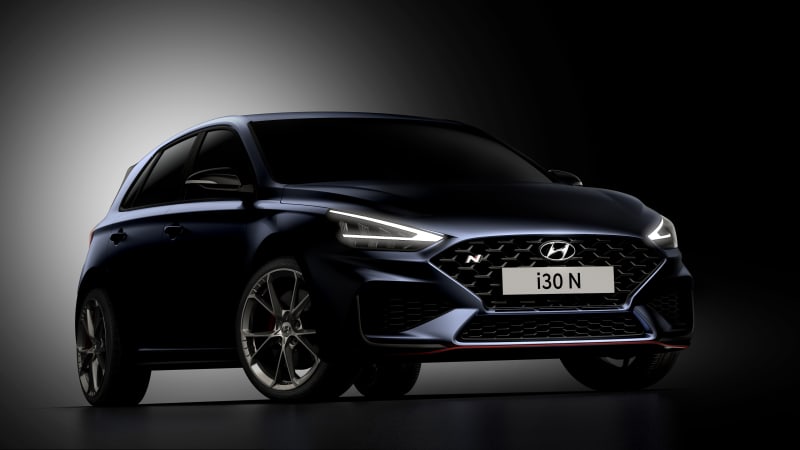 Hyundai confirmed the Elantra GT will not return to the United States for the 2021 model year, but the hatchback is alive and well in Europe, where it’s known as the i30. It received a mid-cycle update earlier in 2020, and the South Korean firm revealed some of the changes it’s making to the spicier, range-topping N-badged model.

Strategically positioned between Volkswagen’s Golf GTI and Golf R, the i30 N receives a redesigned front end that gains a wider grille, bigger air intakes, and sharper-looking headlights with V-shaped LED daytime running lights. It’s a design that brings the hot hatch in line with the 2021 Sonata, not with the 2021 Elantra as you’d expect. Out back, the tweaks include a new-look bumper with a wider diffuser flanked by round exhaust tips.

Nineteen-inch forged alloy wheels round out the list of exterior modifications. Hyundai notes they’re not just for show; they’re lighter than the ones worn by the outgoing i30 N, so they improve handling by reducing unsprung weight.

While photos of the interior haven’t been released yet, one of the most significant changes is that buyers will be able to order the hatchback with two pedals. Demand for an automatic transmission is high, even in one of the stick-shift’s last bastions, so the i30 N will gain the same eight-speed dual-clutch gearbox available on the Veloster N sold in America. Front-wheel drive and a six-speed manual will continue to come standard.

Hyundai didn’t mention if it’s changing anything else under the hood. Power for the current i30 N comes from a 2.0-liter four-cylinder engine turbocharged to 250 horsepower and 260 pound-feet of torque, though enthusiasts who crave more can unlock 275 horses by selecting the Performance model (torque stays flat). It’s the same basic engine that powers the aforementioned Veloster N, and it sends the i30 N from zero to 62 mph in 6.1 seconds. While nothing is official yet, the dual-clutch could allow the i30 to speed its way into five-second territory.

Full details about the updated i30 N will emerge in the coming months, and the hot hatch will go on sale in Europe and in a handful of other global markets (including power-hungry Australia) before the end of the year. It will not be offered in the United States, where the Veloster N will continue to spearhead Hyundai’s efforts to dethrone the sporty Golf variants, but product planners aren’t forgetting about American enthusiasts who want four doors.

Hyundai put more pep in the Elantra’s step by launching a 201-horsepower N Line model, and spy shots strongly suggest a full-fat Elantra N will arrive sooner rather than later. It may offer even more power than the i30 N.