Earlier this month, BMW surprised with an interesting test mule in the vicinity of the Nürburgring race track. Among many prototypes, there was one that stood out. This heavily camouflaged BMW test mule featured some air vents in the side rear window, which naturally sparked lots of conversations.

Clearly, BMW is testing some new tech, and we believe this could include an advanced hybrid platform. While a supercar from the M division doesn’t seem to be in the books, some reports hint at a future top M8 model. This high-end M8 could be the rumored CSL, but with a twist.

We’ve already heard about a new BMW X8 M hybrid coming in the future, even though it hasn’t been confirmed by BMW. The rumored high-end SUV is likely to make use of a hybrid system to deliver a massive 750 horsepower. The same technology could end up in the BMW M8 CSL – a combination of a six-cylinder 3.0 liter unit and electric motors. The total power output could easily pass the 700 horsepower mark, making the M8 CLS the fastest BMW today.

But it’s not just the new tech that would define a potential M8 CSL. The design updates are equally important. This rendering by our friend @zer.o.wt showcases an M8 CSL with a large spoiler, a detail that we have also been seeing tested in some spy photos earlier this year.

The front-end would get a restyled bumper, along with canards on the side panel and additional aero parts on the bottom bumper. The yellow headlights seen on the BMW M8 First Edition highlight the unique character of this car. There is, of course, a massive racing wing sitting on the trunk which helps with downforce. 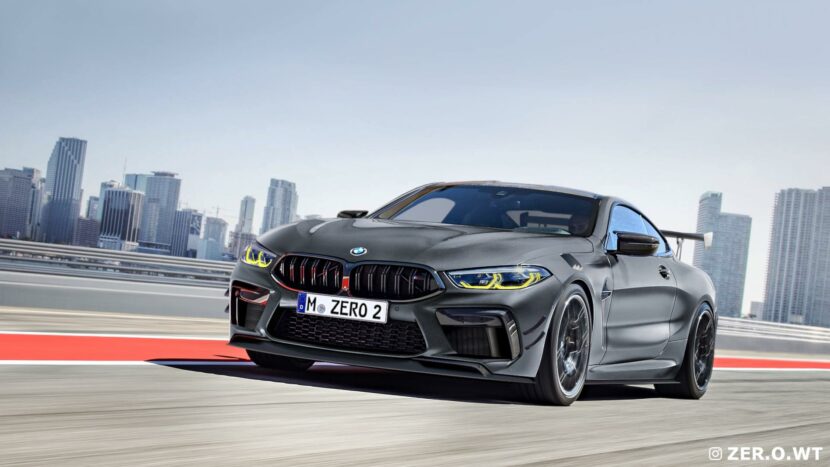 The future GT could also go on a weight loss diet, with carbon fiber elements inside and out, and a potential removal of the rear seat bench.

The birth of new CSL models comes as no surprise to us. In 2019, Markus Flasch, the CEO in Garching, confirmed the possibility of future CS and CSL models. “We will see more limited editions, especially models like the CS and, I can imagine, the CSL,” he said.

Therefore, the M2, M4 and M8 are great candidates to wear the CSL moniker on the boot.