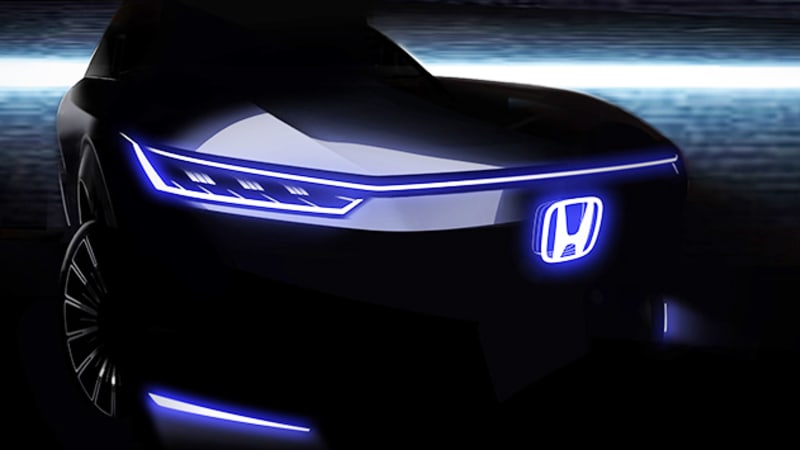 There isn’t much to discuss on the surface here, but news that Honda is preparing its second electric car is of great interest to us. The company’s first EV — the Honda E — is not sold in America, and based on how Honda is framing this car, it won’t be sold in the U.S. either.

Honda’s teaser image is a preview of a concept car that will be fully revealed at the Beijing Motor Show. Honda says it indicates “the direction of the future mass-production model of the Honda brand’s first EV to be introduced in China.” The teaser is posted to Honda’s global news site, but not its North American site, suggesting even further that this car isn’t meant for us.

The teaser itself is relatively plain and devoid of styling details. From just the few lines and creases that we can see, it already looks completely different than the cute Honda E. Whereas that hatchback is endearing and soft-faced, this one is full of sharp angles and hard corners. A bulging fender is visible in front, and part of a (good looking) wheel is also visible. The car’s lighting is the most obvious design element previewed here, though. We get a light-up Honda badge, a full-width LED and additional lighting elements sitting at the bottom of the front bumper. The Honda badge looks like it’s floating out ahead of the car, appearing modern and unique to any other Honda badge we’ve seen before.

In general, the car exudes a sporty attitude, but we have no idea if the powertrain will back that up. Honda doesn’t provide anything more to guide us either, so we’ll need to wait for the proper reveal come Beijing time in late September.

In addition to this electric concept car, Honda promises to reveal a CR-V PHEV for China. There’s no mention of a theoretical U.S. future, but given the excitement around the RAV4 Prime out of the gate, a CR-V PHEV would make sense in America. We’ll need to wait and see specs before declaring it’ll be an instant smash hit, but the wait won’t be long. Beijing’s first day of reveals is September 26.