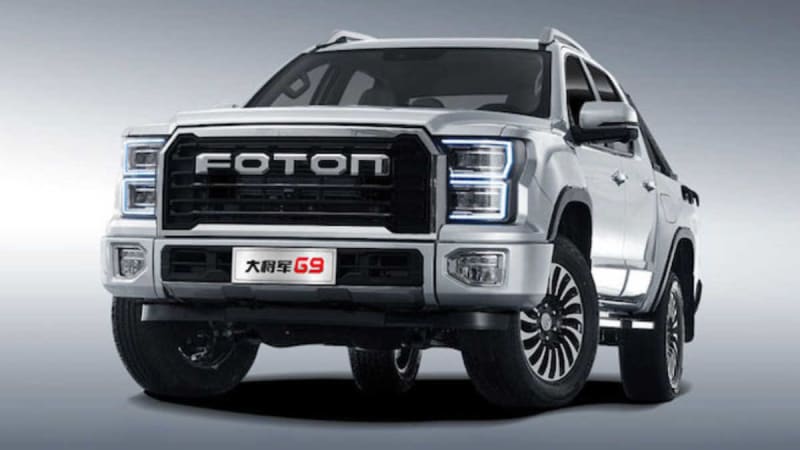 Ford’s second-generation F-150 Raptor will leave an unexpected legacy, and not the Subaru kind. As the firm prepares to replace it with a new model, a Chinese carmaker named Foton is getting ready to introduce a truck named Big General that dubiously borrows more than a few styling cues from the high-performance off-roader.

Images published by enthusiast website Ford Authority show the Big General (which is called Da Jiang Jun in its home country) wears a Raptor-like front end characterized by angular lights mounted vertically, and a tall, upright grille adorned by an oversized Foton emblem. It also gets gray trim shaped like the Raptor’s front skid plate, and fender flares that, to the design team’s credit, are boxier than the Ford’s. Photos of the rear end are not available.

Oddly, one of the images shows the truck riding on alloy wheels that closely resemble the ones available on the Lincoln Navigator. Ford Authority noted the Big General is smaller than the F-150, it’s closer in size to the Ranger and the Toyota Tacoma, but the visual links between the two models are unmistakable — they’re clearer than the ones connecting the 2021 Ford Bronco with the Wey P01 previewed in July 2020. Some will swiftly argue imitation is the sincerest form of flattery, but it’s also known as copyright infringement in legal jargon.

Big General buyers have three engines to choose from: a 2.0-liter, 238-horsepower turbo four, or a four-cylinder turbodiesel with 2.0- or 2.5 liters of displacement. ZF’s eight-speed automatic transmission comes standard regardless of what’s in the engine bay, though we don’t know if it spins the front wheels, the rear ones, or all four.

Foton will introduce the Big General at the 2020 edition of the biennial Beijing auto show, which has been delayed by the on-going coronavirus pandemic but nonetheless stands out as the only major auto show that’s not canceled. Sales will presumably start shortly after, though pricing hasn’t been revealed yet and nothing suggests the truck will be available outside of its home country, let alone in the United States. Ford hasn’t commented on the Big General; Autoblog reached out to the company, and we’ll update this story if we learn more.

China earned a reputation for making Xerox copies of American and European cars in the early 2000s, but this practice is markedly less common in 2020 as its auto industry consolidates and the major players realize they need to forge their own design identities to thrive globally. What’s a little surprising, then, is that the Big General comes from a brand that’s part of the state-owned BAIC group, one of the largest automakers in China. It notably operates a joint-venture with Hyundai, and two partnerships with Mercedes-Benz parent company Daimler.