Finally, the road opened back up and I had the chance to really stretch its legs. I’d driven the R8 for several days prior to that day, so I was familiar with the sensation of opening the taps of the mega V10. However, the sound of it revving to its nearly 8,500 rpm redline never ceased to make the tiny hairs on the back of my neck stand up. I still get chills thinking about it. More than that, there’s nothing that can better ease the frustration of stop-and-go traffic like an 8,000 rpm blast to redline in an Audi R8. 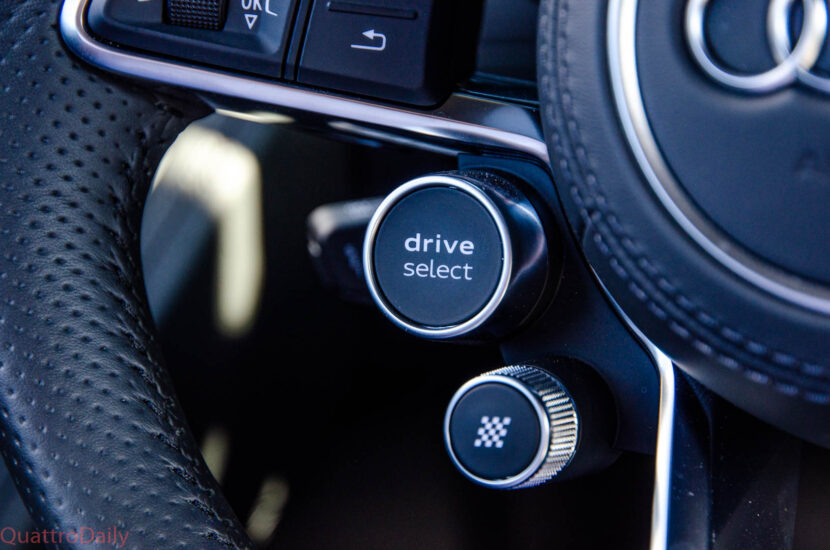 For this second generation facelift of the Audi R8, it’s been given a little button/knob on the left-hand side of the steering wheel, with a checkered flag emblem on it. I recommend all Audi R8 owners and drivers press that button as soon as possible and keep it switched on. It puts the R8 into ‘Performance’ mode and provides three different options; dry, wet and snow. It also turns off traction control, flips the transmission into manual mode and cranks the exhaust noise to eleven.

Hitting that Performance button is akin to seeing pilots in sci-fi movies asking to take control back over their autonomous space ship. I feels like you’re finally taking control of the R8 in the way it’s meant to be driven and it never failed to put a smile on my face.

Being a cool Summer day, I pressed that checkered-flag button (which defaults to ‘dry’) as soon as traffic cleared, dropped several gears and pinned the throttle. The world outside blurred and it felt as if I had just hit light speed on the Millennium Falcon.

The Audi R8 doesn’t accelerate as much as it teleports. It moves so quickly point-to-point that you genuinely don’t have time for your brain to comprehend the distance it’s traveled between massive throttle inputs. Yet it never feels frightening, it never feels intimidating and that’s the beauty of the R8. Thanks to its free-breathing engine, the powerband is beautifully linear and provides a surge of power that’s easy to modulate and control. It’s approachable and its performance accessible.

A Date With Superstars 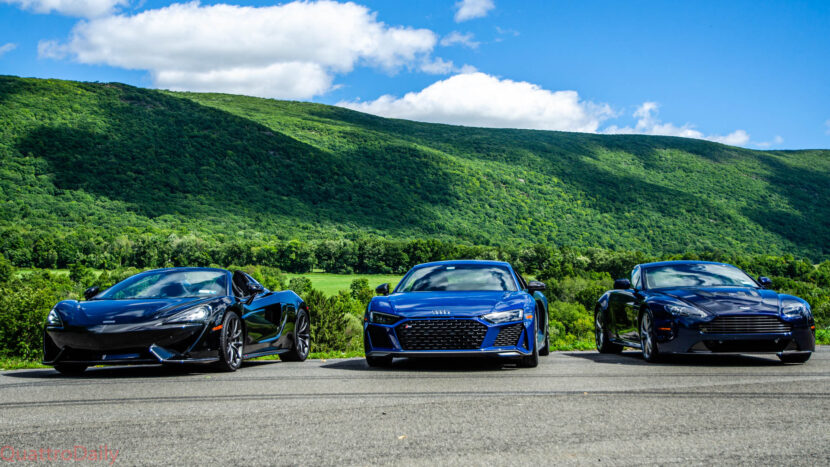 That accessibility came in handy when I found myself in Columbia County, New York, snaking through twisty back roads alongside an Aston Martin and a McLaren.

When we finally met up, after several hours of highway traffic, we caffeinated and got back on the road. Chris, the founder of Limited Slip Blog and our Aston Martin driver, was the one who knew the area well so he took point and we followed. At first, we took it a bit easy, as some of the roads had blind corners and two of us didn’t know what to expect around on the other side. After we became more comfortable, though, we all opened up the taps.

The cacophony of exotic, high-strung engines and exhausts blaring through the tree-line roads was epic. As our revs climbed, it was a symphony of mechanical noise, punctuated by artillery-fire pops and bangs echoing off trees on throttle lift. 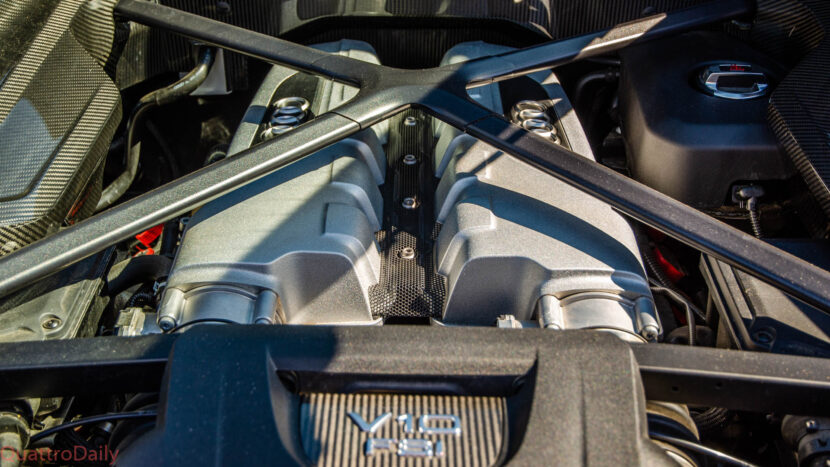 Yet, even among a naturally-aspirated V12 and a twin-turbocharged V8, it was the Audi R8 and its atmospheric V10 that stood out. Even the other drivers were in awe at not just its volume but the music it made. It’s not just loud, the R8 genuinely makes music; exciting, thrilling mechanical music.

There’s something truly special about driving a mid-engine supercar as fast as you dare, while chasing two others. Admittedly, keeping up with the Aston wasn’t much of a challenge. It was the heaviest car of the bunch, sported a manual gearbox (which is admittedly glorious) and because of which was easily outmatched. It sounded brilliant but it struggled to keep either the Audi R8 or the McLaren off its tail.

Love The McLaren, But The R8 Is A Riot

The McLaren was a different story, though. Despite having less power, the McLaren 570S is a remarkably fast car. In fact, there were a few times in which I’d fire out of a corner as well as I possibly could have, thinking I’d left the McLaren behind, only to see it make up the gap at a shocking pace. Its combination of lightweight carbon chassis and explosive turbocharged power make it an absolute weapon on a twisty road.

Even still, I’d reckon I was having the most fun. The Audi R8, despite being almost universally knocked for being the “safe” supercar, is an absolute riot and it’s all down to the ten cylinders sitting behind the driver’s head. 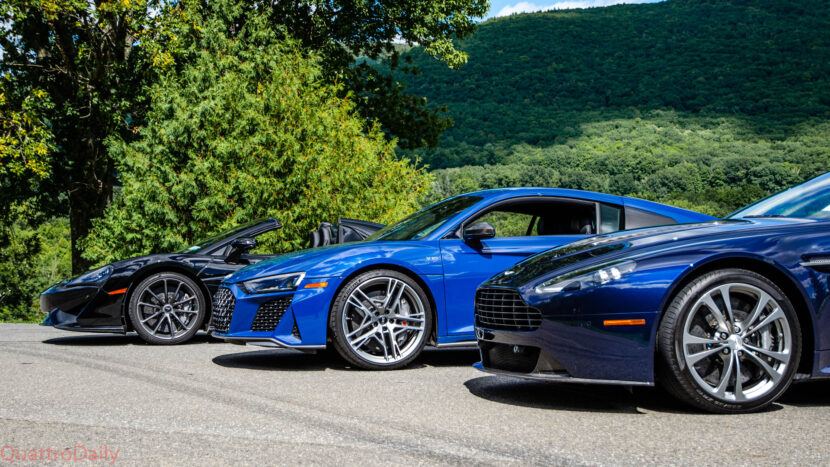 It sounds better than any McLaren (outside the original F1, of course) could ever dream to and its engine is the most enjoyable I’ve ever used. Even among supercars, it stands out as a masterpiece. When it’s all said and done and electrification has become the norm, the Audi R8’s V10 will be looked at as a high-water mark for internal combustion.

But in no way is the R8 just a great engine. It’s a genuinely fantastic sports car. While I’d personally opt out of the Dynamic Steering option that my test car had equipped, the steering of the R8 is remarkably sharp and direct. There’s a good sense of straight-ahead and its weighting builds up nicely off-center, for the most part.

There’s admittedly some understeer at the limit but it’s mitigated by a bit of throttle lift. With the traction control off, as you start to feel the nose push a bit wide, lift off the throttle a bit and the nose will tuck in and the back end will start to slip, giving the R8 a really nice balance once you learn how to play with it. However, with 602 horses, the R8 can bite you if you aren’t careful.

Even the ride is great. We rotated passengers in and out of different cars and all of them were impressed with the R8’s ride. It’s just supple enough to sort out rough bumps but also firm enough to stay perfectly flat through corners.

Once I got into a rhythm, I learned to trust the car, its chassis, its brakes and its grip. After that, I started to really push it and it rewarded with some genuinely breathtaking, adrenaline-filled moments. 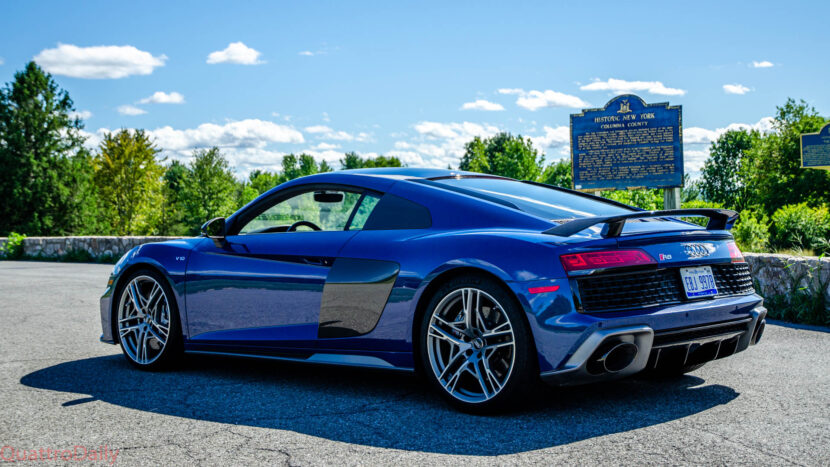 When we’d finished our thrilling drives, nerves finally calming, it was time to head back home. I had another three hours at least of straight-line, highway cruising ahead of me and yet I was looking forward to it. I’d been in the car for almost seven hours straight and was still ready to jump back in and do a few more.

On the way back, I got slammed in traffic. There had been multiple accidents on Route 87, causing me to stop-and-go in the R8 for over an hour, adding even more time to my journey. Yet, with my long-driving playlist pumping from the Bang & Olufsen speakers and everything set to Comfort, I was perfectly happy.

I hate traffic. Hate it. More than most other humans. In fact, I’m not good at sitting in one place for a long period of time, anywhere, simply because my mind starts to go lose its grip of sanity rather quickly. However, in the R8, I was happy, relaxed and even enjoying myself.

Every once in awhile, there’d be a break in the traffic and I’d get egged on by kids in adjacent cars to give it the beans. So I’d rev it up a bit, give them a show and they’d laugh and cheer. The Audi R8 brought joy to other motorists, which made it enjoyable for me, as the driver. 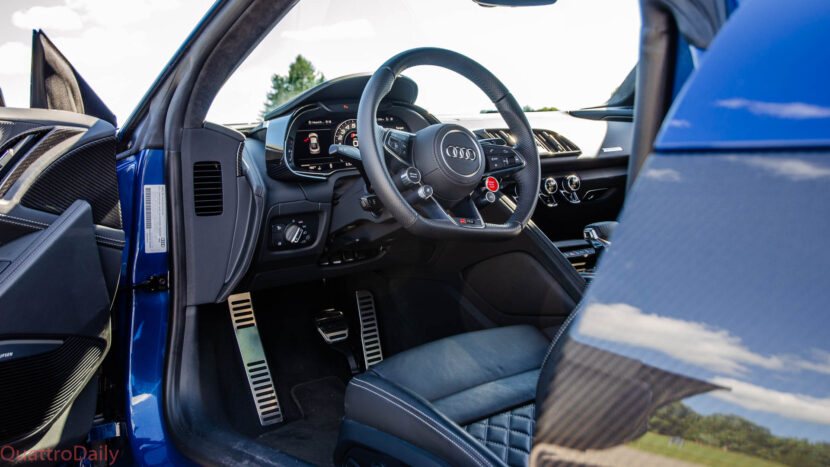 After a long slog back in the dark, I finally made it home. It was late, I was exhausted, starving and desperate to stand up and stretch my legs. Surprisingly, the first six hours or so behind the wheel that day were comfortable, as the R8’s seats are shockingly supportive for being so thin. But the last few hours really started to wear on my legs and ass.

Yet, I said to my wife as soon as I walked back in the door, “I could do another two hours, I think.”

I’m going to miss that Ascari Blue Audi R8. We had a helluva week together and one very special day. A day I’d waited for, and worried about, for almost a year. It was worth every second.