Earlier this week, an interesting BMW prototype popped up on our radar. Initially we thought this is a future BMW M4 CSL based on the upcoming G82 M4, but it turns out that BMW is in fact testing some M Performance Parts. Clearly, some of those parts are also likely to be available on the M4 CSL, but allegedly the funky quad-exhaust will be available as an aftermarket part also.

While all M cars for the past couple of decades have had four exhaust pipes, two at either side of the rear end, this car’s quad pipes are a bit unusual. They’re huddled much closer together and almost stacked on top of each other to create a semi-triangular shape. It’s a very different exhaust configuration from anything we’ve seen on a BMW and some say it reminds them of a Lexus LFA.

In these new photos, we also see a a fixed rear wing. It’s not a large wing but it’s also not some aesthetic lip spoiler, like you’ll find on the back of cars like the BMW M8. This is an actual rear wing that seems to be there for aerodynamics. The last fixed-wing car to come from BMW was the M4 GTS, so it’s likely that this is something similar. That racing wing is also a component of the BMW M Performance Parts for the new M3 and M4. 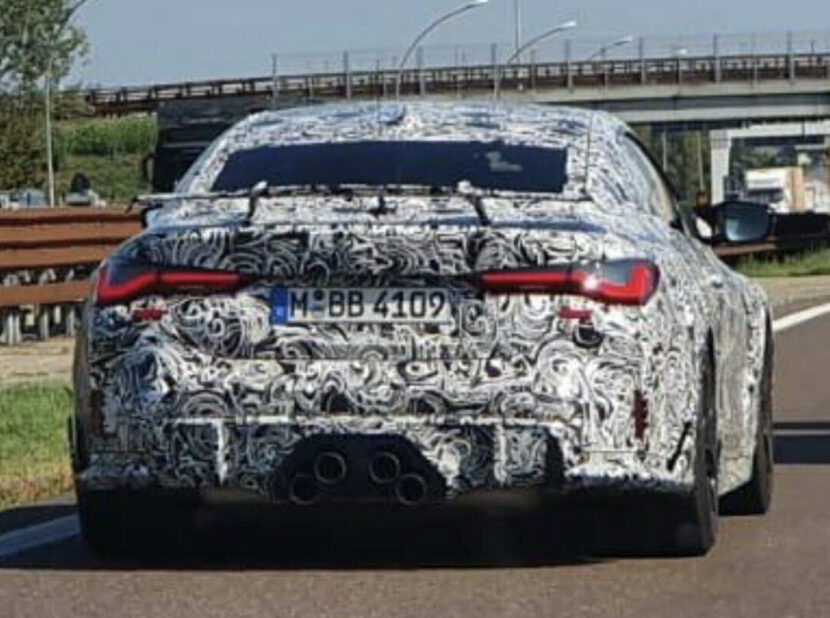 While this prototype is not the M4 CSL, we do know that at least one CSL variant will come on the G8X platform. The GTS name was retired last year and instead, BMW will revive the legendary CSL branding. We will also have two CS versions in between the regular M3/M4 and the top CSL model.

From what we learned, the BMW M4 CSL is shaping up to be quite special with a lot of different parts compared to the regular M4 which will make it stand out even more. Of course, that will imply a significantly higher price point as well.

Now whether this new M Performance Exhaust comes to market, remains to be seen. But one thing is clear: BMW is not afraid to push the envelope with their new M3 and M4.