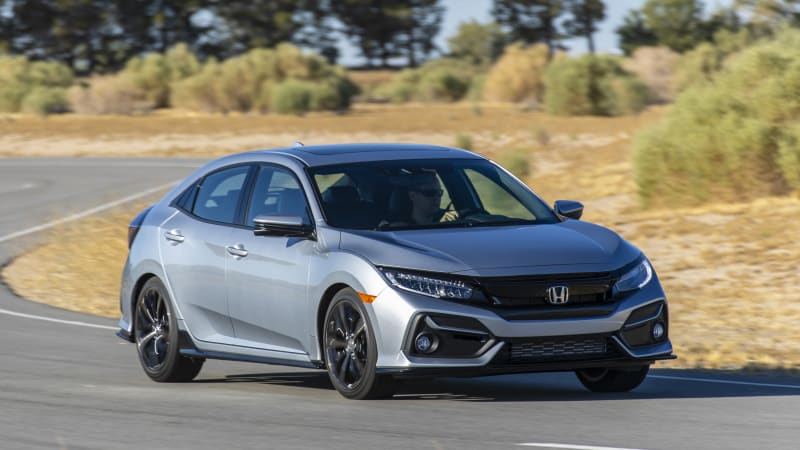 After detailing the Type R Limited Edition, Honda has released pricing information for the 2021 Civic Hatchback. It’s not making any major changes to the model, but it’s slightly increasing prices across the board.

The lineup consists of four trim levels: LX, Sport, EX, and Sport Touring. That’s down from five in 2020, because the EX-L model which was positioned one notch below the range-topping trim is not coming back for 2021. Pricing starts at $22,000 before a $955 destination charge enters the equation, meaning putting a Civic Hatchback in your driveway will cost at least $22,955. For context, the 2020 model started at $21,650 before Honda added a $930 destination charge, so it was priced at $22,580.

At the other end of the spectrum, the Sport Touring model costs $29,355 with a six-speed manual transmission or $30,155 with a continuously variable transmission (CVT). It’s the only member of the Civic Hatchback range that tops $30,000, unless you count the Type R; its Limited Edition model starts at $44,950.

Still excluding the R, every variant of the Civic Hatchback ships with a turbocharged, 1.5-liter four-cylinder engine that makes 174 horsepower and 162 pound-feet of torque. Front-wheel drive is the only configuration offered. The efficiency champs of the range are the LX and EX models, which are both exclusively offered with a CVT. They return 31 mpg in the city, 40 mpg on the highway, and 34 mpg in a combined cycle. Selecting the six-speed stick (which is standard on Sport and Sport Touring models) reduces those figures to 29, 37, and 32, respectively.

Honda dealers across the nation will begin receiving the 2021 Civic Hatchback in September. Information about the 2021 sedan hasn’t been published yet, though we imagine it’s not far behind, and don’t expect to find a Coupe or an Si model. Both have been discontinued for the 2020 model year. While the two-door is unlikely to come back, Honda confirmed the Si will return when the 11th-generation Civic goes on sale during the 2022 model year. We’ll see another hatchback, too, and it will be built in the United States.

Motorists in the market for a compact hatchback are running out of options. If the Civic isn’t your cup of tea, its main competitors are the Toyota Corolla Hatchback, the Subaru Impreza, and the Mazda3. Ford abandoned the segment when it pulled the Focus from our market, and Volkswagen confirmed the regular version eighth-generation Golf will not be sold in the United States. We’ll get the GTI and the Golf R, however.