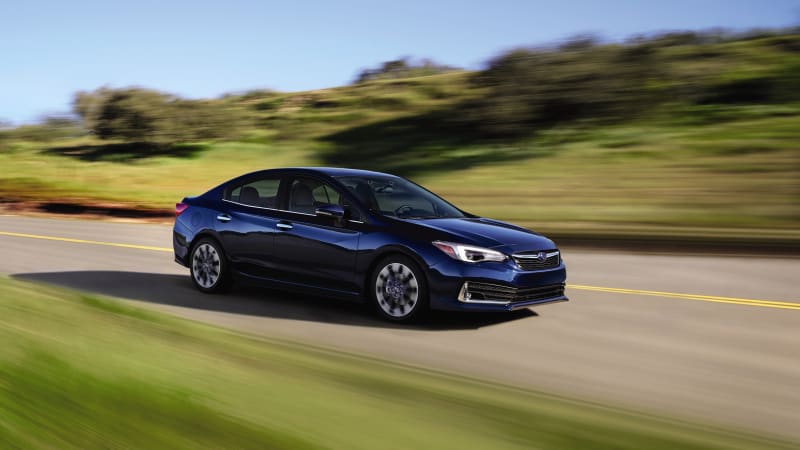 Subaru has announced pricing information for the 2021 Impreza. It costs a little bit more than the outgoing 2020 model, but some trim levels gain a new feature named SI-Drive that adds two driving modes.

Pricing for the 2021 Impreza sedan, the company’s entry-level model, starts at $19,720 including a mandatory $925 destination charge. For context, the 2020 model cost $19,595. Putting a 2021 in your driveway will cost $100 more, but Subaru increased its destination charge by $25, so the next model year will bring a $125 increase. That figure corresponds to a base variant equipped with a five-speed manual transmission. Motorists who want two pedals need to plan on spending $1,120 more for a continuously variable transmission (CVT).

The lineup still includes four trim levels called base, Premium, Sport, and Limited, respectively. The CVT-only range-topping model costs $26,820 including destination, a $125 drop compared to 2020. On the hatchback side of the portfolio, the base model costs $20,220 and the more upscale Limited carries a price of $27,320.

Subaru gave the Impreza a mid-cycle update for 2020, so the 2021 model is essentially unchanged with the exception of an SI-Drive performance management system. Only offered on cars equipped with the CVT, it adds two driving modes that “allow the driver to maximize engine performance, control, and efficiency,” according to the brand. This technology is already found in several global Subaru models, including the WRX.

Although the Crosstrek entered the 2021 model year with a bigger engine, the Impreza it’s based on remains exclusively available with a 2.0-liter flat-four engine rated at 152 horsepower and 145 pound-feet of torque. Subaru’s symmetrical all-wheel drive system comes standard regardless of trim level or body style.

Subaru will begin sending the 2021 Impreza to its American dealers in October 2020. It will join the rest of the lineup with one exception: the BRZ. Production of the enthusiast-approved coupe is ending, and the company has stopped taking new orders for the model in Japan. It’s again working with partner Toyota to bring a second-generation model to the market, and we hear it might make its debut in time for the 2022 model year.