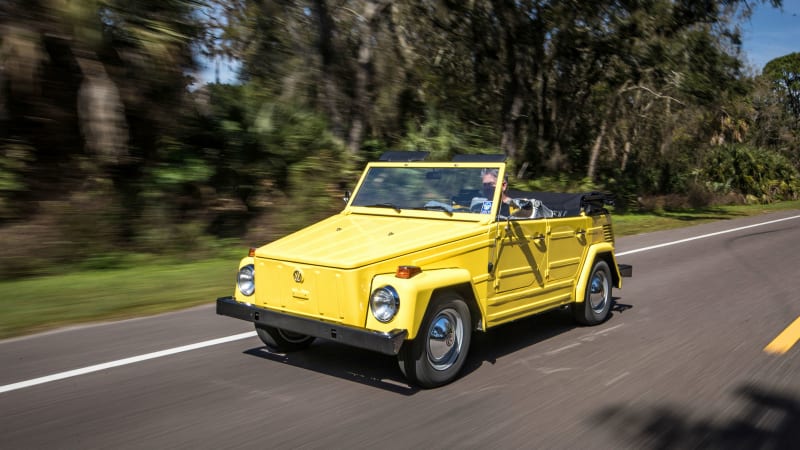 Volkswagen is still analyzing ways to inject a dose of adventure into its growing range of electric cars, according to a trademark application filed in Europe. It requested to protect the e-Thing nameplate, which hints at a vehicle that’s electric and either inspired by the original Thing (also known as the Type 181) or based on it.

Europe’s trademark office received the request on August 31, according to The Drive. It’s relatively simple, and it’s not accompanied by a sketch that would provide us with a better idea of what the Wolfsburg-based company has in mind. What’s clear is that it’s related to the Thing sold in various global markets from 1968 to 1973.

Based on the Karmann Ghia, and powered by the Beetle’s venerable air-cooled flat-four, the Thing was an open-top four-seater with removable doors and a windshield that users could fold down. It wasn’t an off-roader by any stretch of the imagination because it was rear-engined and rear-wheel drive. Available in America in 1973 and 1974, it was closer to beach cars like the Citroën Mehari and the Mini Moke than to 4x4s like the Jeep CJ-5.

Here’s where the speculation begins. One options is that Volkswagen could be on the brink of introducing a modern-day Thing built on its highly modular MEB platform. It would likely wear a retro-inspired design, and there’s a decent chance it would arrive as an open-top four-seater like its predecessor. It could pick up the ball set rolling by the ID.Buggy concept introduced in 2019. As much as we like this option, it’s unlikely at best.

Volkswagen has made it clear that, moving forward, all of its electric concept cars and production models will be lumped under the ID umbrella. It recently introduced the ID.3, a Golf-sized hatchback developed largely for the European market, and it’s preparing to unveil the ID.4, a Tiguan-sized crossover aimed at America. Even the retro-fabulous modern-day Bus was part of the ID family; it was previewed by the ID.Buzz concept, though its production name hasn’t been decided yet. If a new Thing was around the corner, it would likely be called ID.Thing. ID.Thingzz, maybe, if we take into account the company’s admiration for the last letter in the alphabet.

Another, more realistic possibility is that Volkswagen will electrify a vintage Thing. It already trademarked the e-Samba and e-Beetle nameplates, among others, and it unveiled electric variants of the Bus and the Bug earlier in 2020. If the powertrain — which consists of a 36.8-kilowatt-hour battery pack and an electric motor sourced from the e-Up! — fits in a Beetle, putting it in a Thing would be a relatively straight-forward process.

Ultimately, both alternatives might be more or less correct. As we reported recently, an unverified report suggests Volkswagen is in the process of developing an electric SUV that will put a much bigger focus on off-road prowess than the aforementioned ID.4. It will borrow some styling cues from the ID.Buggy, and insiders have described it as “cheap to build, easy to clean, flexible, and affordable to run,” attributes that also portray the Thing. It’s allegedly due out in 2023, and — if that’s accurate — we’ll see it as a concept before it lands in showrooms around the globe. It won’t be a retro-themed interpretation of the Thing, but it will share some of the model’s DNA.

Volkswagen hasn’t commented on the trademark filing. It’s important to remember carmakers routinely protect nameplates without planning to use them on a production model, whether it’s new or old.