“Even if it isn’t the fastest car – there’s always something that draws [the enthusiast] to the car they drive – something special that can’t be replicated or substituted – and that’s why you choose that car.” Isn’t that the truth. You could probably imprint this on a stone tablet and sell it as wall art on Etsy to décor-minded car enthusiasts. I’ll take 5% of all proceeds on that, by the way.

As a fanatic for finicky and failure-prone vintage BMWs, I’ve begun to believe most enthusiasts are united by a communal Schadenfreude, because the only thing better than driving your car is knowing how much better it will drive when it all gets sorted.

But I didn’t pull this lofty quote from an Internet message board, or a particularly silver-tongued car critic – it came, unprompted, from James, the owner of a 1 Series M Coupe I had the pleasure of spending some time with. And it perfectly sums up both the car and the man behind it. 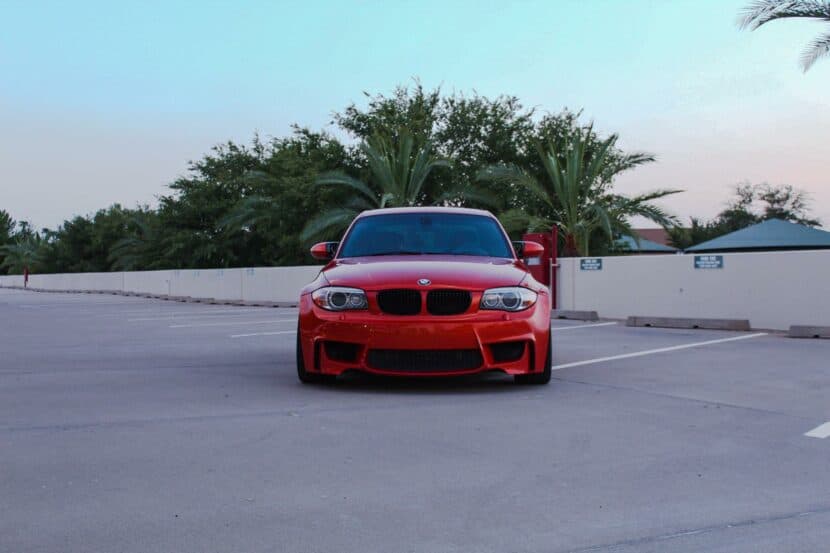 I paraphrased a little bit, but this wasn’t an entirely unexpected quote from a man who sat in the 2011 1M coupe on display at the New York Auto Show and locked himself in it. While inside, he experienced what some would call a “moment of clarity” – a singular event where one’s destiny becomes clear and everything else gets tuned out. Fortunately for both of us, following a long path of BMW M car ownership, that destiny has been fulfilled.

Obtaining the car has a bit of a story behind it, too. Venturing deep into rural Oregon in response to a Craigslist ad, the seller and James came to an agreement satisfactory for both owners. The seller was appreciative that the car would be going to an enthusiast, and James finally got his dream car. Well, almost.

He needed to sell his E92 M3 in order to finalize the transaction, which slowly became a few-week long ordeal as buyers became flaky and cash got tied up. Every day, James would check in and apologize profusely, but apparently the former owner didn’t mind all that much. Eventually, the two finalized the deal, and that brings us, eventually, to today. 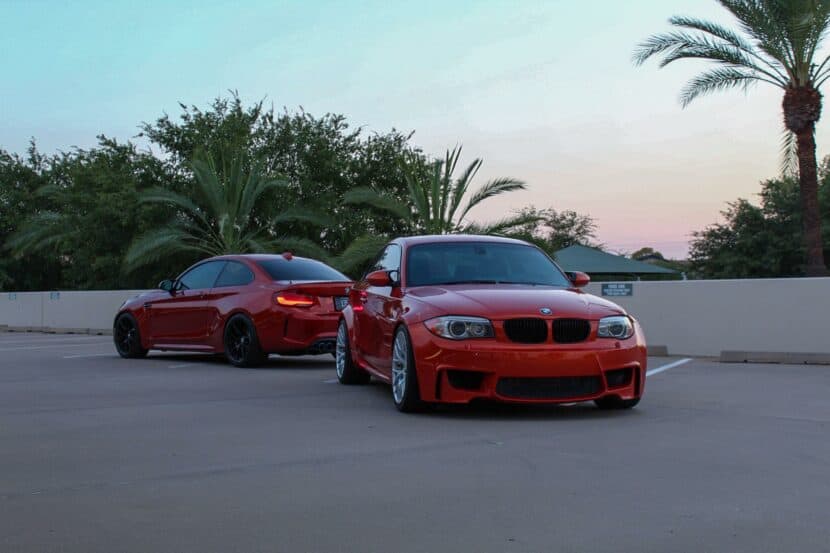 Here we are meeting up in an abandoned car park so I can hopelessly pore over and photograph James’s 1M, after seeing his car out in the wild and connecting over social media. Lucky for me, James’s a true enthusiast and has lots to say about his car, my car, and every M car in between.

James has made a few carefully selected modifications to his 1M – upgraded intakes and exhaust, a more efficient intercooler, and an appropriate tune. He threw on some wider tires and stiffer lowering springs to help the car put down some of its already chassis-overwhelming power. We swapped keys (my M2 Competition, his 1M) and exchanged our take on the cars.

James liked the M2 – the first thing he mentioned when driving was “you can tell this is an S code engine”, referring to the S55 underneath the hood. Notably, the S55 is derivative of the N54 found in his car, but the power is delivered very differently.

Peak power arrives around 6000 RPM in the N54, while the S55 in the M2C screams all the way to 7000 (onwards to a redline at 7600). He appreciates the stock power of the car but is even more enamored with the ability to make a few simple modifications and be well over the 500whp mark.

Also appreciated were the grabby brakes – the M2’s 400mm/380mm rotors providing a lot more stopping power over the 1M’s smaller but still substantial 360mm/350mm setup. He thought the M2 had improved interior quality over his 1M as well (mostly the gauges and use of soft-touch materials), and the exterior styling was just aggressive enough to be good looking. 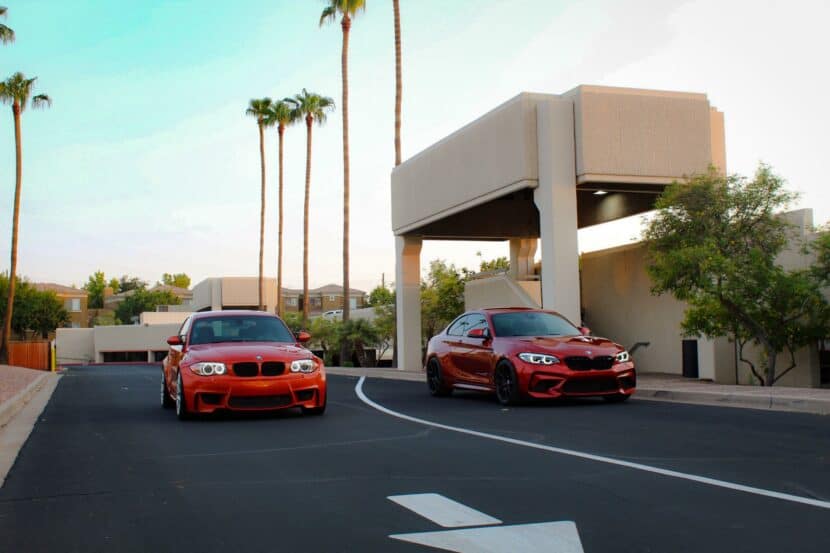 My turn to drive the 1M. The steering is easily the most unforgettable part of this car. The headline is “quick, direct, and communicative” – never leaving any question as to what’s going on beneath the front two tires. This is something I’ve sorely missed in my M2 – despite better steering weight than the non-M offerings, the feel is still somewhere between “slightly censored” and “totally sterile”, depending on how you’re driving.

Though mechanically no different than the E92 M3, the 1M’s lower weight pairs with the comparable power to leave it with a certain agility missing from the big brother M3. The 1M’s agility is what makes it special, and what separates it from even buttoned-down cars like the M2.

Power felt similar between the two cars, but the gobs of low-end torque can certainly come on a little quick – not necessarily a bad thing on the street. The classically good looking and simple cockpit gives you all the information you need and nothing you don’t – the way it should be for a proper driver’s car. 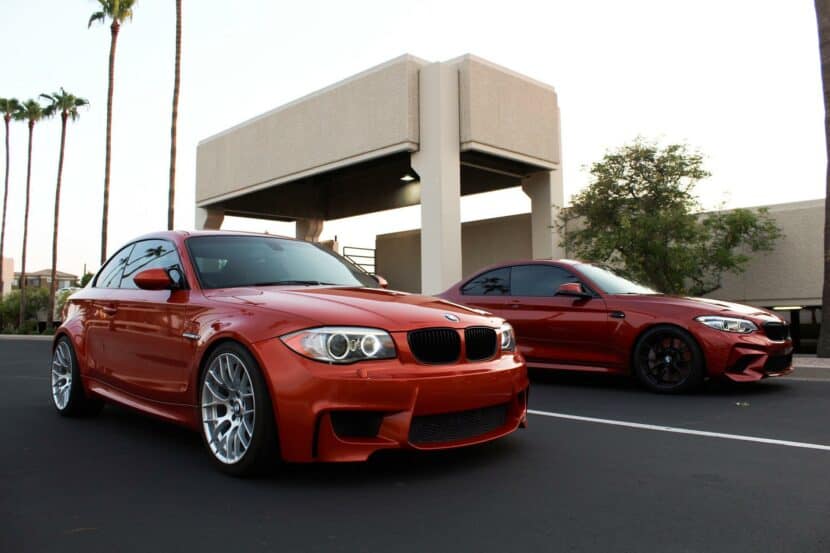 There’s a familiar adage in the car community – “never drive your heroes”. The idea behind this line of thinking is that, like hyping yourself up for the next episode of Space Force, or a vacation to the Jersey shore, the idea of the experience far exceeds the reality of the experience and you come away feeling lost and disappointed.

Fortunately, the 1M is not one of those experiences. The 1M delivers everything it promises – quick, communicative steering, matched to a robust and responsive drivetrain, in a fun-loving and excitable chassis. The twin turbo six pairs amicably to the six speed manual transmission, and all of the E92 M3 chassis bits (control arms, bushings, differential, brakes, steering rack, wheels, etc.) work in tandem to make this 1 Series a car that time, and enthusiasts, will likely never forget.

Similarly, the M2 Competition pairs a fantastic powertrain with an interior that truly feels special, and always seems like it’s trying to use that 406 lb ft of torque to send you through the back of the driver’s seat and back to the 90s, where all a BMW needed was RWD, a manual transmission, and an engine with more personality than common sense. 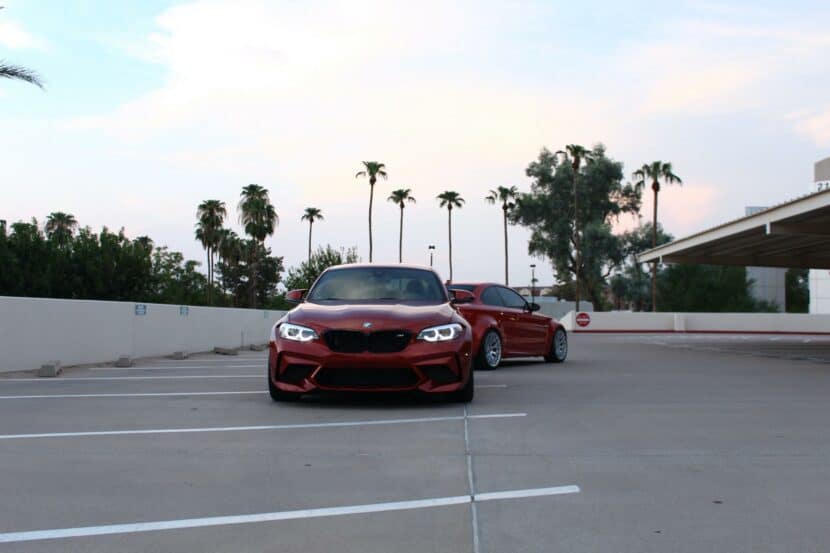 Sadly, it won’t ever get you there – even at 88 mph. And despite the great technology and arguably improved interior layout, a lot of the positives relevant to the driving experience are simply automotive plastic surgery – fighting against time. Superpower technologies (improved traction control, customizable throttle mapping, automatic rev-match downshifting) increase the fun factor but sometimes get in the way of a truly engaging drive. More power and comically large brakes are only present to offset the heavier curb weight.

It was the best of times; it was the worst of times. The M2 is almost perfect. About as good as it gets in 2020. However, after driving the 1M, you can’t resist thinking that if you shaved 300 pounds off, got it hydraulic steering, and fitted an analog temperature gauge, you’d have the most driver-centric BMW made in the modern era. 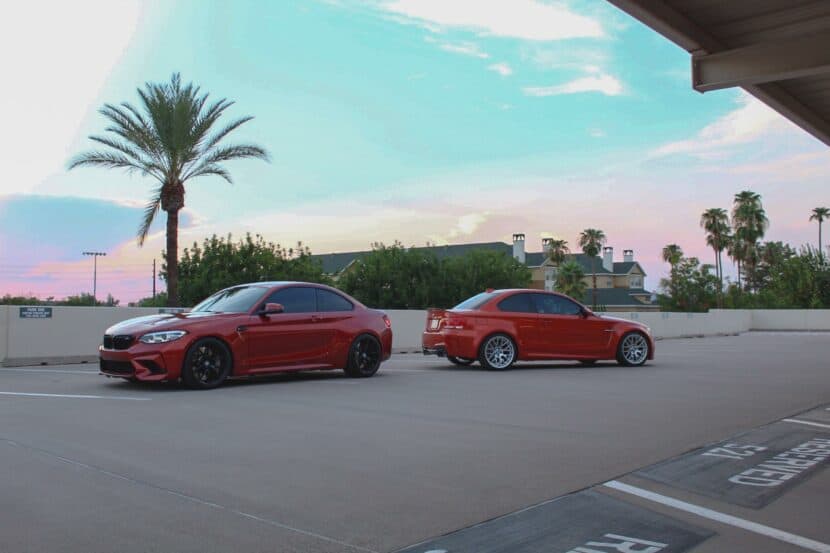 But after those modifications you will have exactly recreated a car that BMW’s M division almost never made 10 years ago. Perhaps because it’s the only turbocharged M car with hydraulic steering. Or the almost goofy, concept-car look of 19” wheels being fitted on the little BMW coupe.

No, it must be the ridiculous widened front and rear track to accompany said wheels and offer enhanced grip everywhere you want it. Is it all of the above? Regardless, the tiny 1M stands miles above its contemporaries, leaving an indelible mark in BMW’s history – and for some of us, there is rightly no substitute.