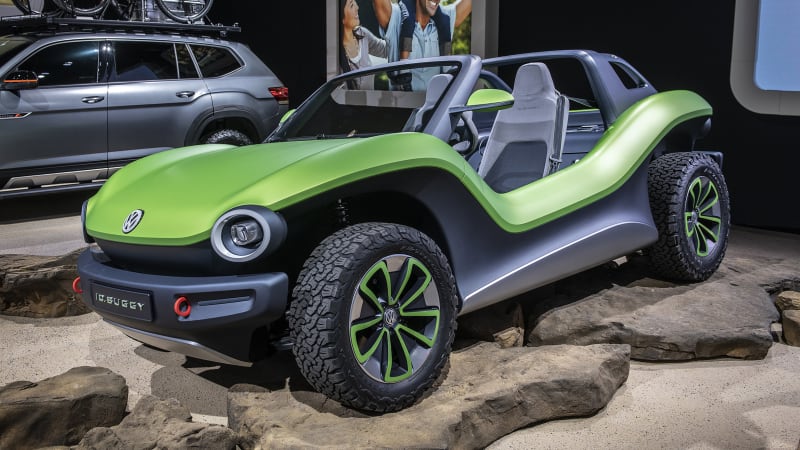 Volkswagen revealed its take on the original Buggies of 60 years ago at the 2019 Geneva Motor Show. Instead of a Beetle chassis, though, the Geneva car (shown above) sat on the automaker’s all-electric MEB architecture, powered by a 62-kWh battery for up to 155 miles on the WLTP cycle. Ever since, there have been stories about how the concept car could reach production. The initial plan was for VW to sell rolling chassis’ to Aachen, Germany-based E.Go Mobile as the base for at least one new new vehicle, but E.Go declared bankruptcy. Then VW decided to recast the Buggy plan, turning the design into a boxy crossover. In a report from February of this year, the model would be called the Ruggdzz. Car magazine reports the name is Ruggedzz, now with an “e,” and it will be a rugged — naturally — crossover that’s the alter ego of the imminent ID.4 crossover.

The Buggy concept was about the size of a modern Golf, with the ground clearance of a Jeep Wrangler. Design elements from the concept like a “chunky bumper arrangement” and ample ground clearance could transfer to the Ruggedzz, to go with a vertical front end, flat hood, steep windshield, and “nearly flat roofline and sheer sides.” We’re not sure where final product, assuming there is one, will fit into the market. At one point, the report calls the electric crossover “kind of an electric Defender for the not quite so wealthy.” At another point, the Ruggedzz is a rebirth of the VW Kubelwagen, known as the Thing in the U.S., “Cheap to build, easy to clean, flexible and affordable to run … aimed at the young outdoors and lifestyle crowd.” The Thing was also a convertible, all of which sounds like an electric Wrangler, not Defender. An initial estimated length of 181 inches would make the electric VW about seven inches shorter than both the Defender and Wrangler.

If based on the ID.4 powertrain, an all-wheel-drive Ruggedzz could pack a 101-horsepower motor at the front axle and a 201-hp motor at the rear, and somewhere close to 300 miles of range on a charge. It’s said the new model will hit assembly lines in 2023 and be the basis for similar takes from Seat, Skoda, and VW’s Chinese sub-brand called Jetta.