After just over 10 years, the Rolls-Royce Ghost is getting its second generation. This is an important moment, since the Ghost has been the luxury brand’s bestseller. The result is a car that has changed significantly underneath to refine the things owners will see and experience.

The exterior styling doesn’t look drastically different at first, but looking closer reveals many significant changes. The trademark Rolls-Royce grille is wider and taller, and doesn’t have a thick arcing border around it. The headlights are larger with sharper corners and angled slightly to sweep up towards the corners of the fascia. Moving along the sides show a similar profile to the old car, but the tail’s trunk lid leans forward, as do the taillights. There’s not a distinct ledge to the rear bumper, either, giving this new Ghost a sportier appearance. An extra bit of flair Rolls-Royce added is the illuminated grille. There are 20 LED lights in the top part that shine down onto the grille slats, which in turn reflect light outward.

Under this new skin is a chassis that’s exclusive to Rolls-Royce, unlike the old Ghost’s BMW 7 Series-derived chassis. This new frame uses the flexible all-aluminum platform that underpins the new Phantom and the Cullinan. The car is also larger than its predecessor with 3.5 more inches of length and 1.2 inches of width. It all sits on independent air suspension at all four corners featuring some upper wishbone dampers at the front that Rolls-Royce says helps improve ride quality, though hasn’t revealed detailed information on how it does so. It’s supported by software that coordinates the reactions dictated by the suspension sensors, drive settings, all-wheel drive, four-wheel-steering (both new features for the Ghost), and even the navigation-controlled transmission to optimize driving performance and comfort. Powering the Ghost is Rolls-Royce’s twin-turbocharged 6.75-liter V12. It makes 563 horsepower and 627 pound-feet of torque. Obviously only an automatic transmission is available, and power goes to all four wheels as previously mentioned. 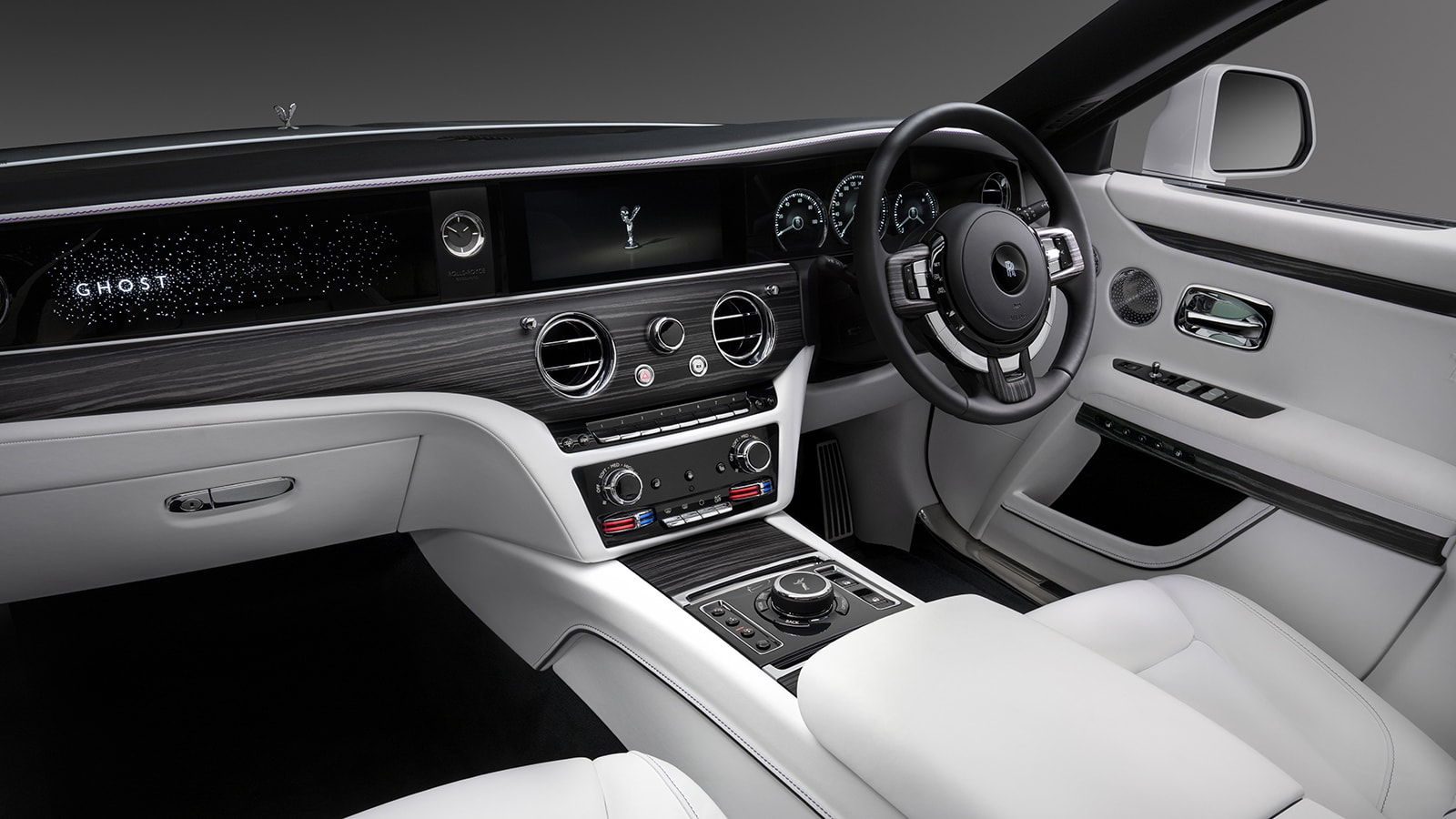 The Ghost’s interior takes cues from the Phantom, with a full-width section encompassing the instruments, infotainment and an artistic dash panel, which we’ll talk more about in a moment. Below that is a wood-finished panel incorporating some air vents and controls. Open-pore woods are available, including one that features aluminum in the wood grain. The whole dash looks lower and leaner than that of the flagship Rolls, though. That dash panel we mentioned looks like a plain black piece, but it conceals lights that illuminate the car’s name and a constellation of stars. Those stars are then echoed in the available starlight headliner. Rear seat occupants are treated to loads of leg room and reclining seats. All occupants also get doors that not only have a power closing function, but a power opening function. Sensors detect incline and can direct the motors to either open the doors with more or less power to ensure consistent opening times.

Rolls-Royce also noted its extreme measures to optimize sound in the car. The floor and firewall are double-walled with composite material in-between to reduce noise. Aiding those features is 200 pounds of sound insulation around the cabin. Other examples of extreme noise reduction measures are the HVAC ducting that was polished to reduce air noise and a driveshaft that was resized and strengthened, again for maximum quietness. Any noises leftover Rolls-Royce tried to keep as close in frequency as possible, adding dampers to the seats to get noise frequencies closer to the car body, and additional cavities in the trunk to get low-frequency noises away from the cabin. If you don’t like near silence, the Rolls comes with an 18-speaker 1,300-watt sound system that features speaker components that turn the door sills and headliner into speakers, similar to what Honda did with the bed of the Ridgeline. Naturally, the Rolls-Royce also comes with all manner of driver assists, safety features and infotainment gizmos for the driver to play with.

Rolls-Royce hasn’t said exactly when the Ghost will go on sale, and pricing hasn’t been released, either. We would expect pricing comfortably above the $250,000 mark. This Ghost will be around for quite awhile, as Rolls-Royce indicated it will have a 10-year cycle like its predecessor.