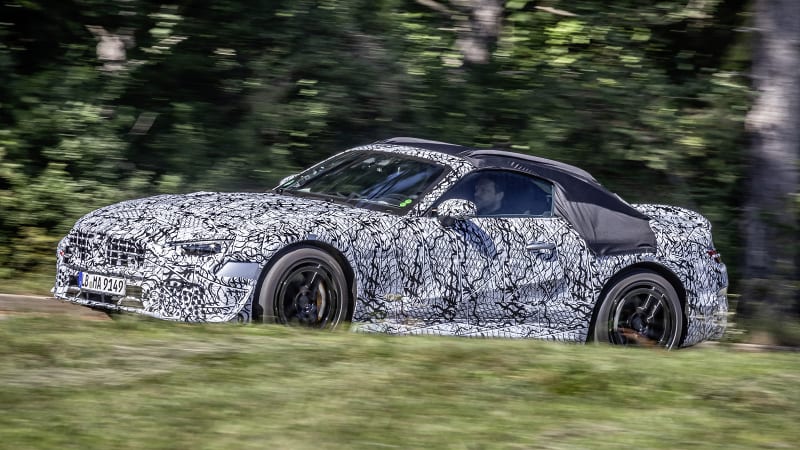 We’ve seen spy photos of the next-generation Mercedes-AMG SL Roadster recently, but now Mercedes has seen fit to release its own images. The photos come as Mercedes announces the car is beginning testing on public roads. There isn’t much else Mercedes revealed, but it did make an interesting statement about the SL.

Looking at the photos, we can see that the new SL takes lots of inspiration from the AMG GT sports cars. It has the same sort of grille, scowling headlights and rounded tail as AMG’s coupe. The proportions are different, though. The nose looks lower, at least in comparison to the rest of the car, and the passenger area sits farther forward allowing for a distinct rear deck instead of the GT’s fastback roof line. The trunk lid has a ducktail spoiler shape, and we can see two different sets of exhaust tips between the two cars in the photos.

As for the aforementioned statement, Mercedes says, “The next generation of the legendary SL Roadster is returning to its roots, which trace back to the iconic 300 SL competition racing car of 1952.” That’s interesting because for the last few decades, the SL has been more of a grand tourer than an outright sports car like the original gull-wing 300 SL. So the new SL may be significantly sportier feeling and performing than its predecessor. This is also backed by the fact that the car has now been named as a Mercedes-AMG product, with no mention of a Mercedes-Benz variant.

We don’t have a clear timeline for when the new SL will debut, but we’re expecting it in a couple of years based on testing and how covered this prototype is.