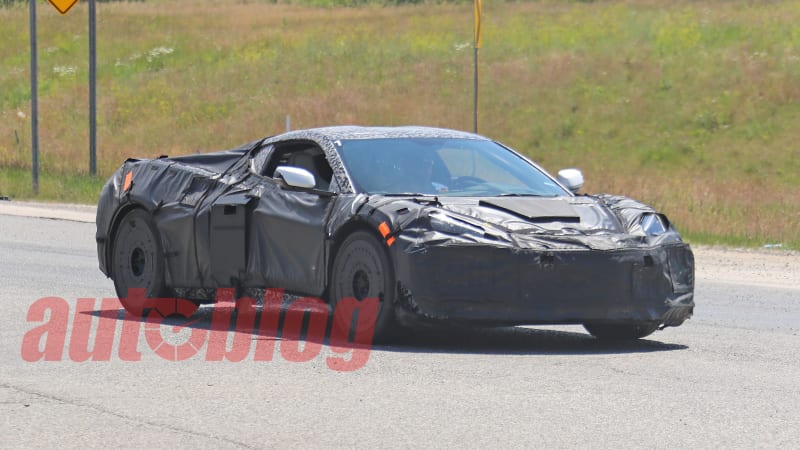 It’s time to head back to Rumor Town with the Chevrolet Corvette. This time, Motor Trend says it has a scoop on the upcoming Z06 and ZR1 versions of the mid-engine sports car. Although, if what MT claims is true, we might as well just call them supercars.

We’ll start with Z06. Motor Trend’s unnamed source says it will reportedly be packing a 5.5-liter naturally aspirated flat-plane crank V8. And yes, it will be a double-overhead-cam design. Redline will be 9,000 rpm, which would make it one of the highest-revving engines in the world. Chevy has foretold that it would use a road-going version of the C8.R’s 5.5-liter flat-plane crank V8 engine in a future Corvette variant. Packing it into the Z06 would make perfect sense and bring the Z06 back to its naturally-aspirated roots. There is one aspect of the report we’re skeptical of: the horsepower figures. The source claims this 5.5-liter V8 will make 625 horsepower, which seems mighty high for a naturally aspirated engine. That’s 113.6 horsepower/liter, which is a big step up from the Mustang Shelby GT350’s 101 horsepower/liter. Put simply, it’s Ferrari and Lamborghini territory for a vehicle that will cost a mere fraction of those cars. We’re not saying GM can’t do it, but we sure will be wildly impressed if it can.

The sound of one heavily camouflaged Corvette running around with an exotic scream trailing it is indication enough that GM is cooking something rather devilish up. Torque is rumored to be well over 400 pound-feet, but not more than 500. This will be a high-revving affair, after all. Motor Trend’s source said “it’s going to be a screamer.” The engine in the race car makes just 500 horsepower and 480 pound-feet of torque, but racing restrictions don’t have to be abided by on the street car. That said, the street car must also pass emissions and run on pump gas, so it’s a two-way street. Previous rumors have suggested that this engine comes aboard the Z06, and they’ve offered even more info including wheel/tire packages, active aero and a possible center-exit exhaust system.

As for the ZR1 also mentioned by Motor Trend, its source says the 5.5-liter V8 will gain a pair of turbochargers. The rumor is approximately 800 horsepower for this version, but we won’t put much stock into this prediction just yet. A hybrid Corvette isn’t out of the question either, with the possibility of adding an electric motor to the ZR1 for an ultimate Corvette. We’re fairly certain this version will have enough power to escape Earth’s gravity.

The last bit of info gleaned from this report is on a Grand Sport model. MT’s source claims that there will be no Grand Sport, which is a real shame to hear. The Grand Sport was arguably the best version of the C7 Corvette in many ways.

Timing for all of this is totally up for debate, but we wouldn’t put it past Chevy to introduce the Z06 within a year from now. The rumored 9,000 rpm redline already has us swooning.