The 2020 Audi S7 is a German technological tour de force. Its taillights and headlights greet the owner with a welcoming light show upon pressing the unlock button. Electric, soft-close doors whir shut luxuriously. An array of three impressive HD screens stare back at the driver awaiting instruction. The unique electric compressor makes subtle whining noises upon stomping the throttle pedal. It’s a mild-hybrid with a 48-volt electrical system, occasionally, shutting off the engine while coasting at high speed or as it trundles up to a red light. All of it really makes you wonder: How will this car be getting along 25 years from now? A scary thought, given all the stereotypes of complex, used German vehicles. Let’s not fear for the future, though. This tech is impressive, so you might as well enjoy it.

Since this is the S7, in addition to it having all the A7’s tech doo-dads, it’s also sporty. The most notable addition is the 2.9-liter twin-turbo V6 under the long hood. It produces 444 horsepower and 443 pound-feet of torque (109 and 74 more than the A7 respectively), sending the S7 to 60 mph in just 4.5 seconds via the car’s launch control mode. This model and the S6 are the first two Audis sold in the U.S. to take advantage of Audi’s electric turbocharging technology. The electric compressor is run off the car’s 48-volt electrical system and functions as a torque filler while the traditional turbos build boost. Ultimately, the point is to eliminate what we often refer to as turbo lag, giving the driver a more connected feel to the powertrain and increasing throttle response. All this power is routed through an eight-speed automatic transmission and doled out via Audi’s quattro all-wheel-drive system.

The last-gen S7 had a 4.0-liter twin-turbo V8 under hood that made 6 horsepower more and 37 pound-feet of torque less than the new S7. It also sprinted to 60 mph in the same 4.5 seconds, a shock considering that cars rarely stay the course on speed in a new generation. In almost every circumstance, the manufacturer makes the new car more powerful and faster than the old. That’s simply not the case with the 2020 S7. However, there is one silver lining to the downsized engine. This new S7 achieves slightly better fuel economy than the outgoing car, ticking up one mpg in every category. Still, it’s a bit of a drinker coming in at 22 mpg combined.

Similar to the previous S7, this one has an optional S sport package ($4,000) to turn the wick up a bit more. It adds a sport quattro differential, sport exhaust, all-wheel steering and red-painted brakes. Audi upgrades the brakes as standard for the S7, and it also comes with an “S-tuned” adaptive air suspension. Our tester has the even better S Sport adaptive steel suspension ($350) that offers the most dynamic of experiences. The big package is pricey, but worth the coin if you intend to take full advantage of the “S” in S7. 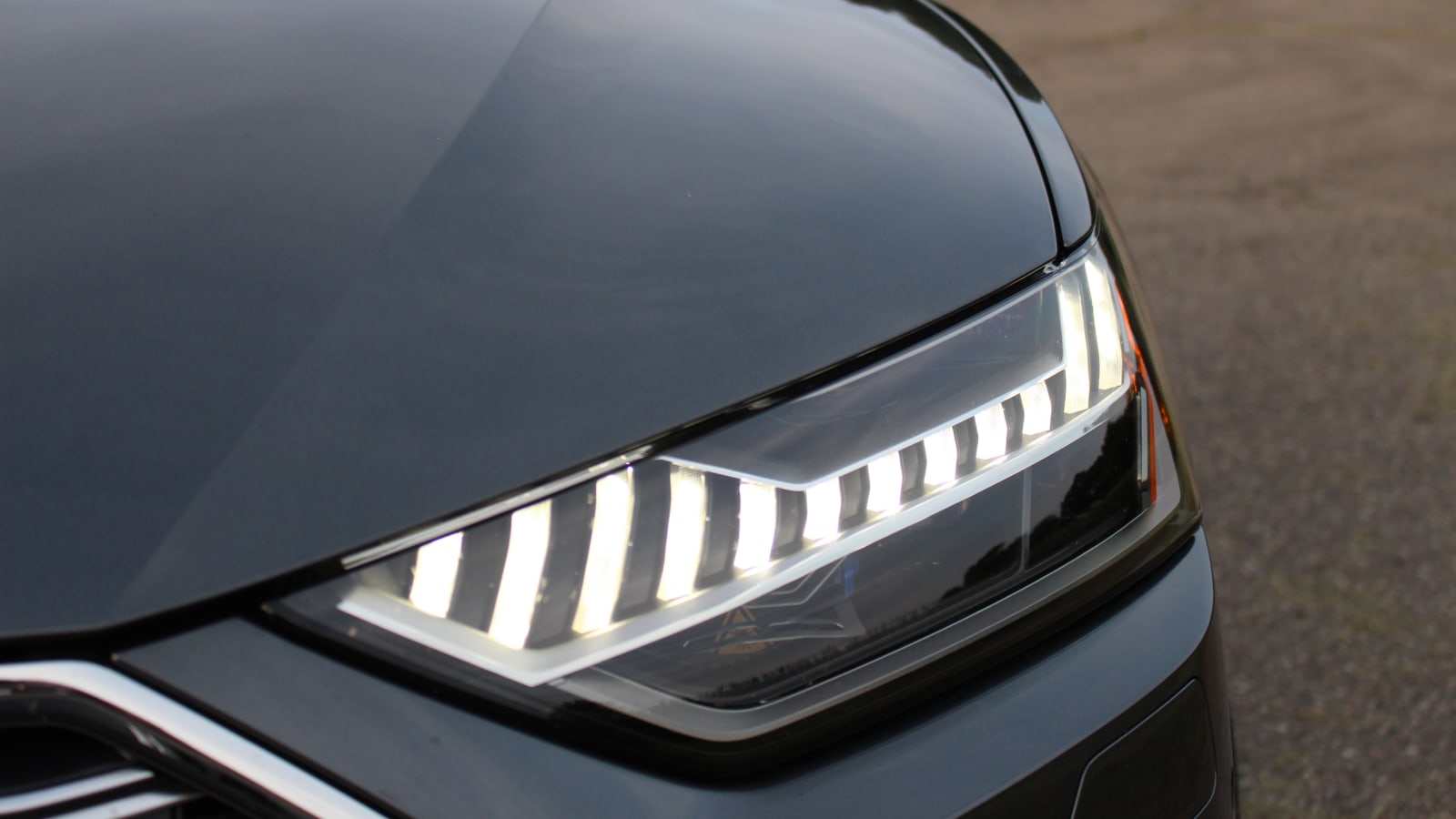 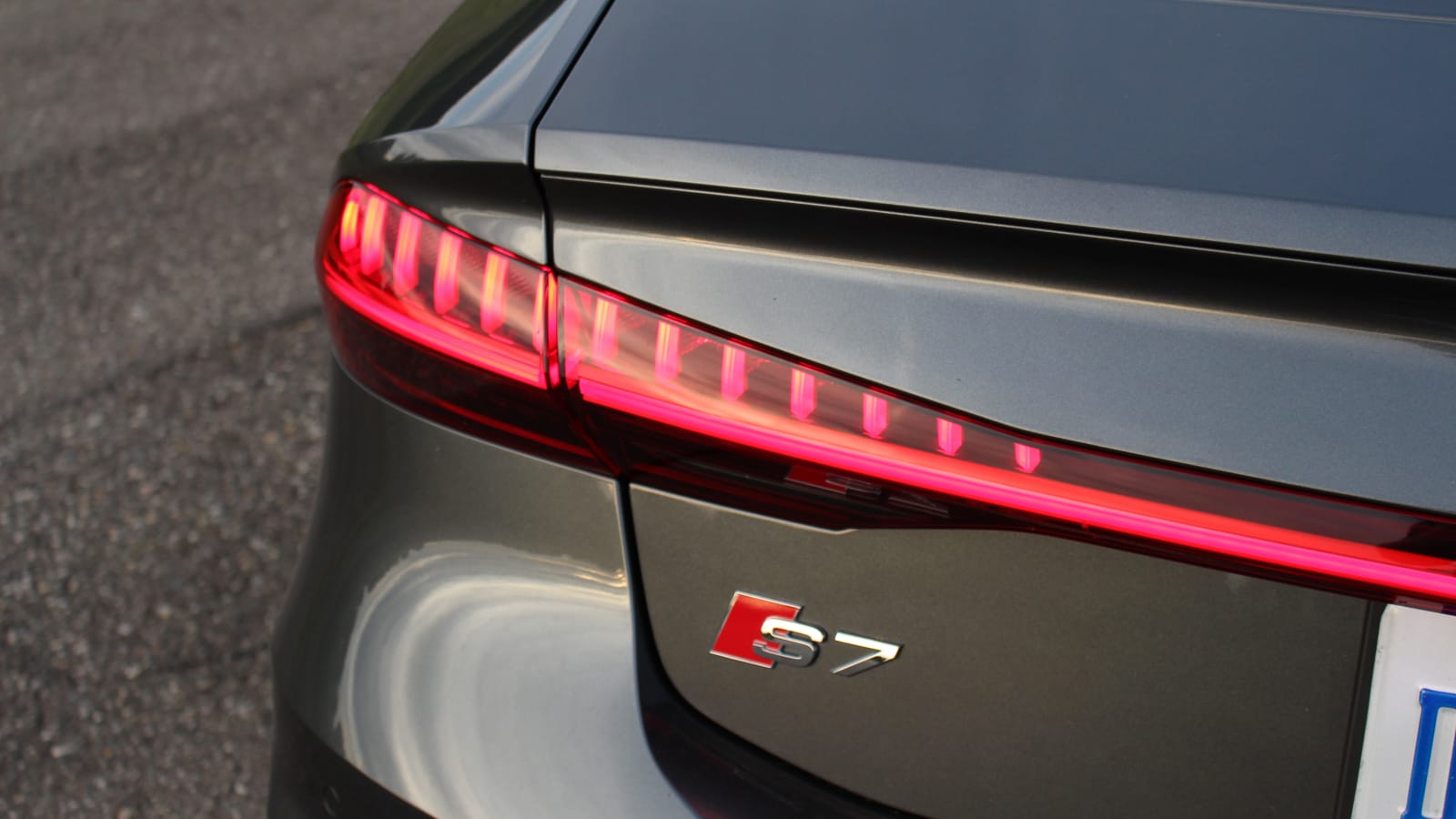 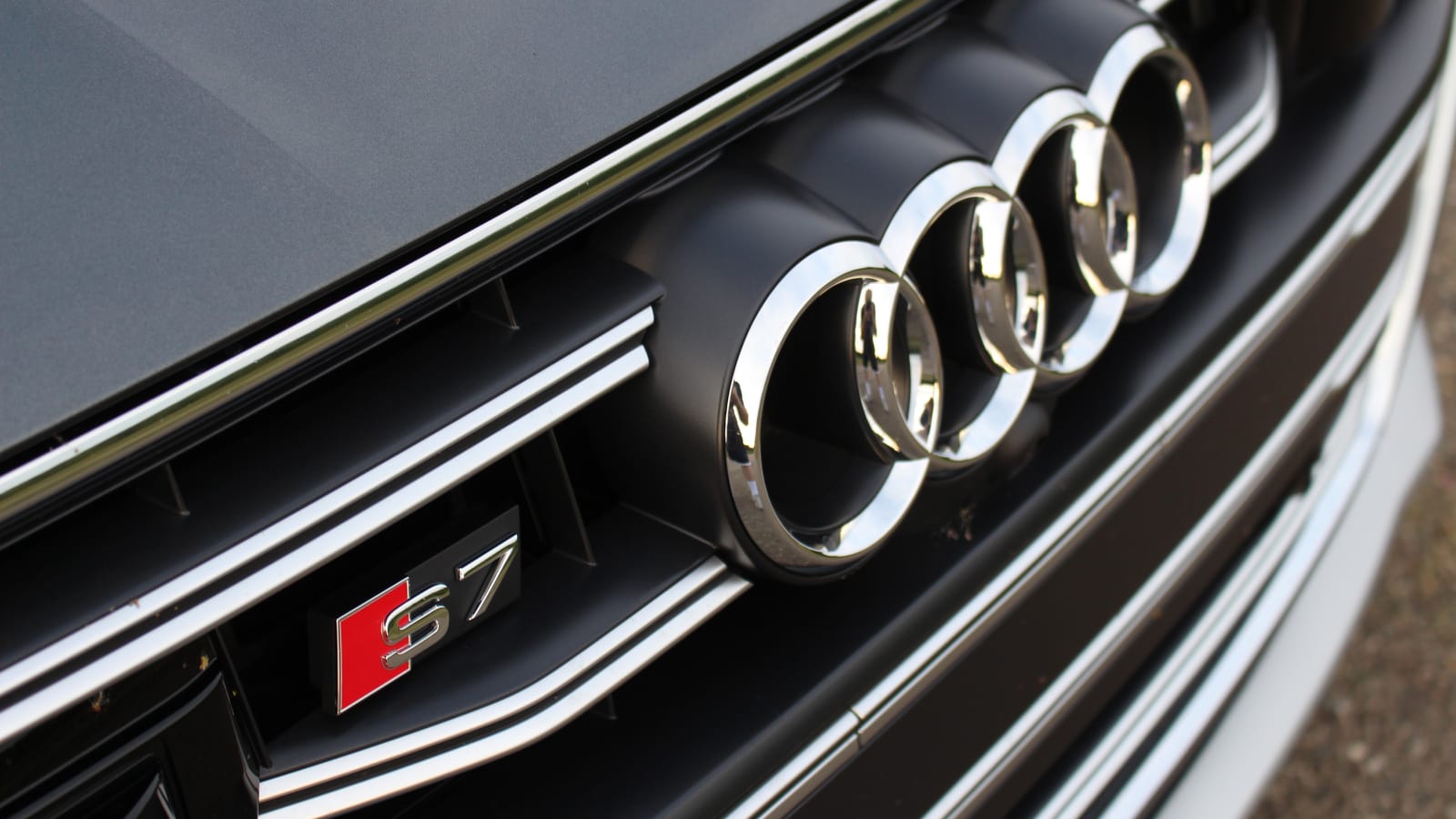 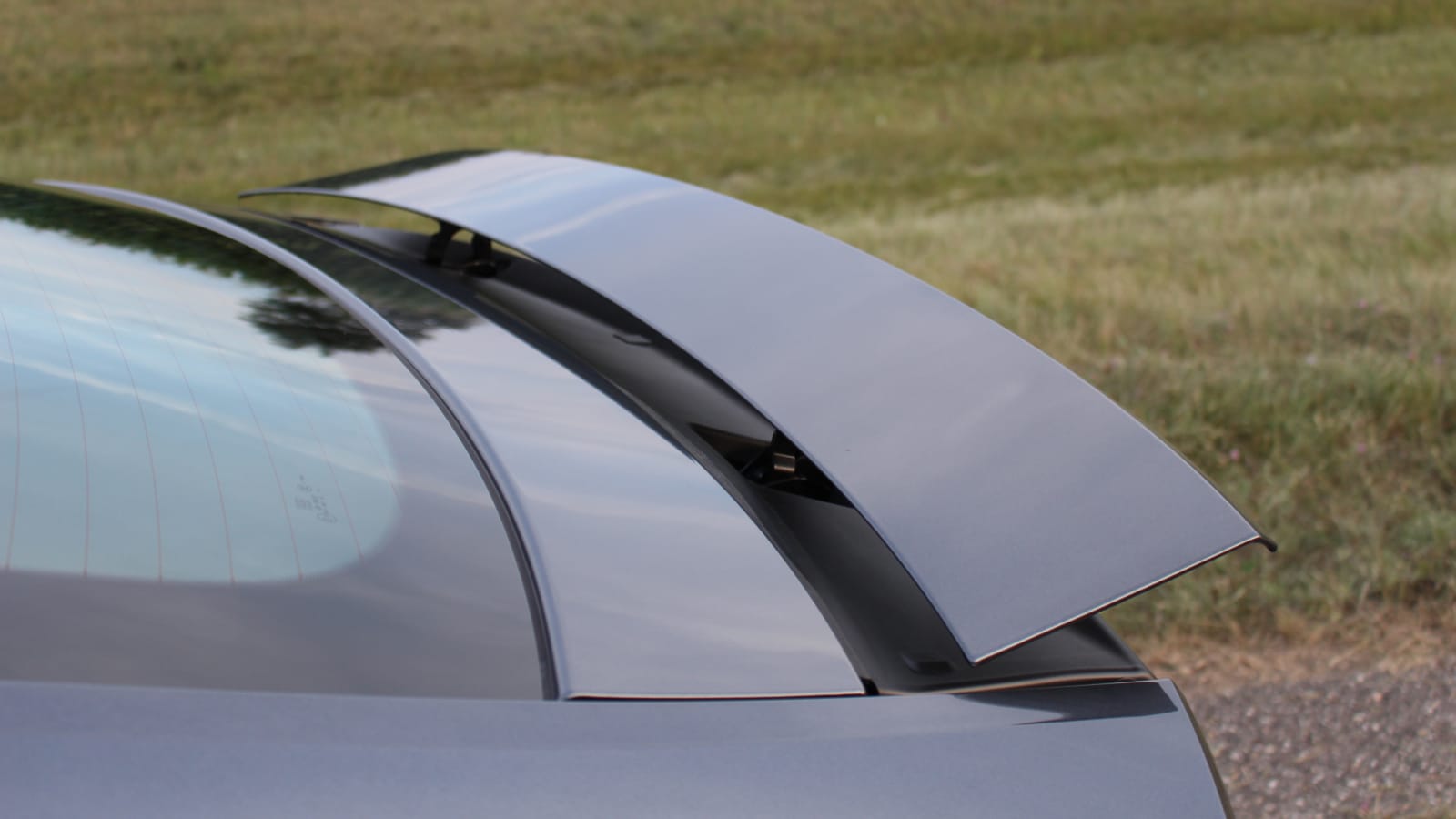 The result of Audi’s fiddling is a quick (but not too fast) luxury boat that responds kindly to being tossed around. Holding the throttle to the floor results in hurried acceleration from the smooth V6, but it’s the noise that’s even more impressive. Each shift is capped off by a riiiiiiiip that’s rather un-Audi-like in nature, echoing off buildings and causing a general ruckus wherever you go. That sport exhaust is a bit childish for such a black-tie and suspenders kind of car, and for that, we say amen.

Hopping on the gigantic clampers is reassuring. This massive (4,597 pounds) Audi can scrub speed in a hurry, and it does so without inducing clenching. Despite the weight and large footprint, the S7 is remarkably easy to hustle round corners. The car remains flat and controlled with the adaptive dampers in Dynamic mode, but the chassis’ flexibility and forgiveness make it splendid to push on imperfect pavement, too.

There’s an undeniable digital feeling to the whole endeavor, but it’s always apparent when you’re approaching the limits through a corner. The weight transfer to the front tires and tendency to understeer makes driving it fast very approachable for most, but it could get boring if you’re the type who wants a car to feel alive. If that’s the case, let us introduce you to this car’s traction control off switch. One press of this turns TCS off and puts stability control in a more relaxed state of being. After a jab of the fun pedal in a tight left-hander sent the rear sliding out, we knew we’d found the right button to make this car especially fun to drive. The previously tame and serious chassis turns into a tail-wagging, smile-inducing toy. It’s plenty deserving of the S badge.

Audi plants more than a few of those S badges throughout the car’s exterior and interior, too. The S model is also distinguished via silvery-gray trim throughout and S-specific bumpers. It’s not overtly sporty, but the S7 has a slight edge that’s missing in the standard A7. This car’s shape always has been and still is seductive. Those who prefer a cleaner design will like the previous S7, as the new one appeals to someone with flashier taste. It’s more brash and angrier despite sharing the sloping sportback roofline of before that’s become so influential in sedan designs. 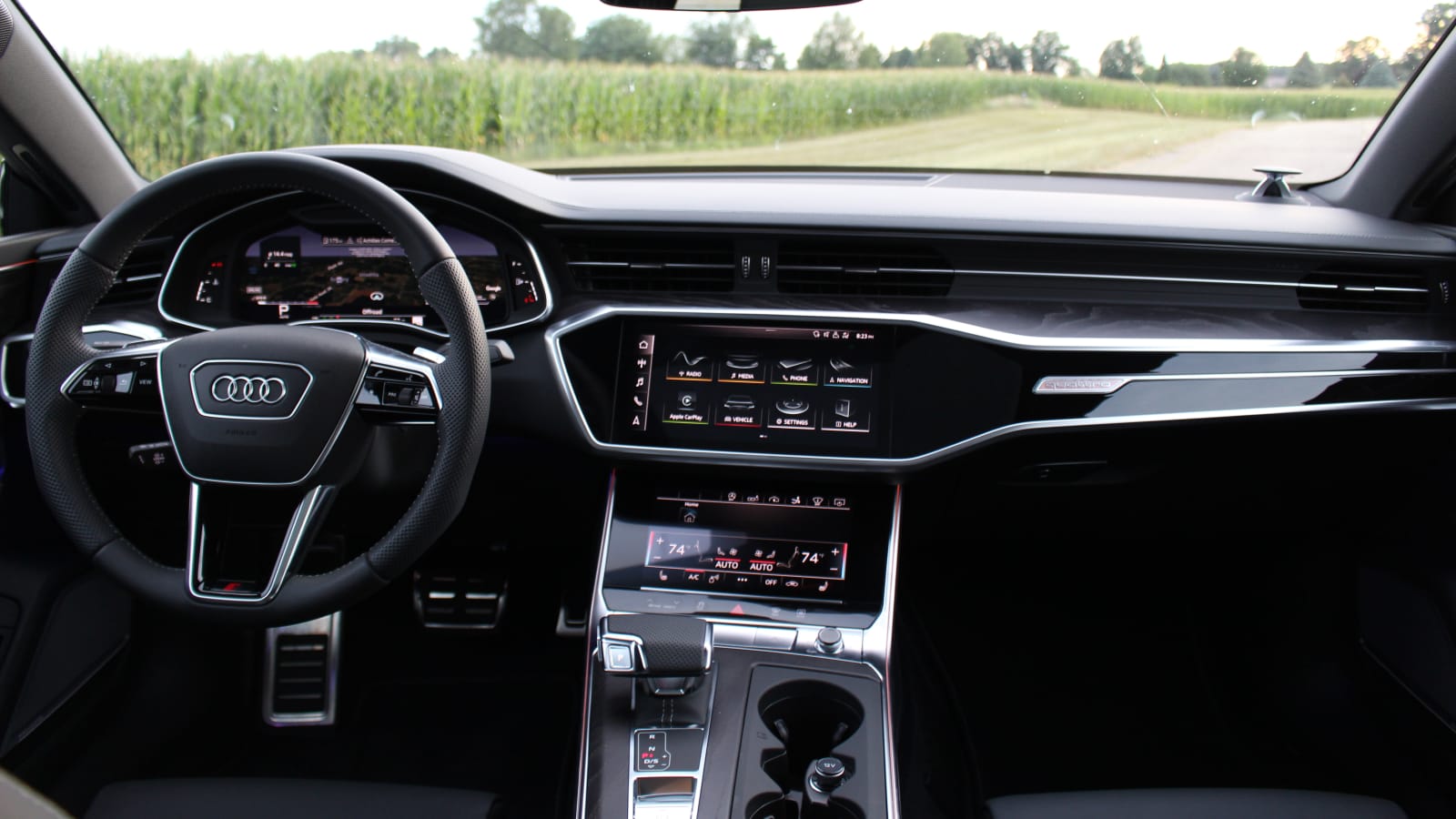 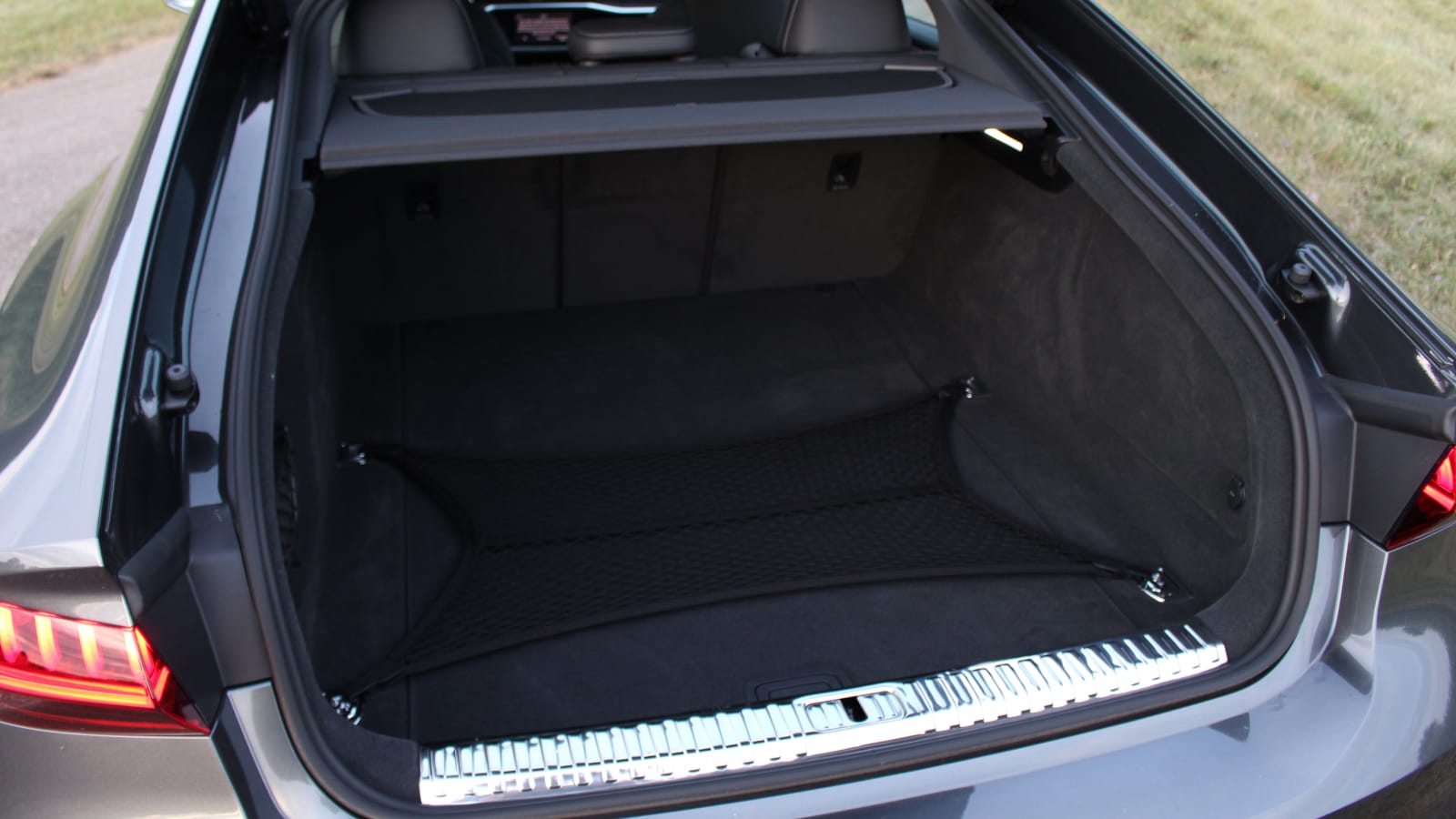 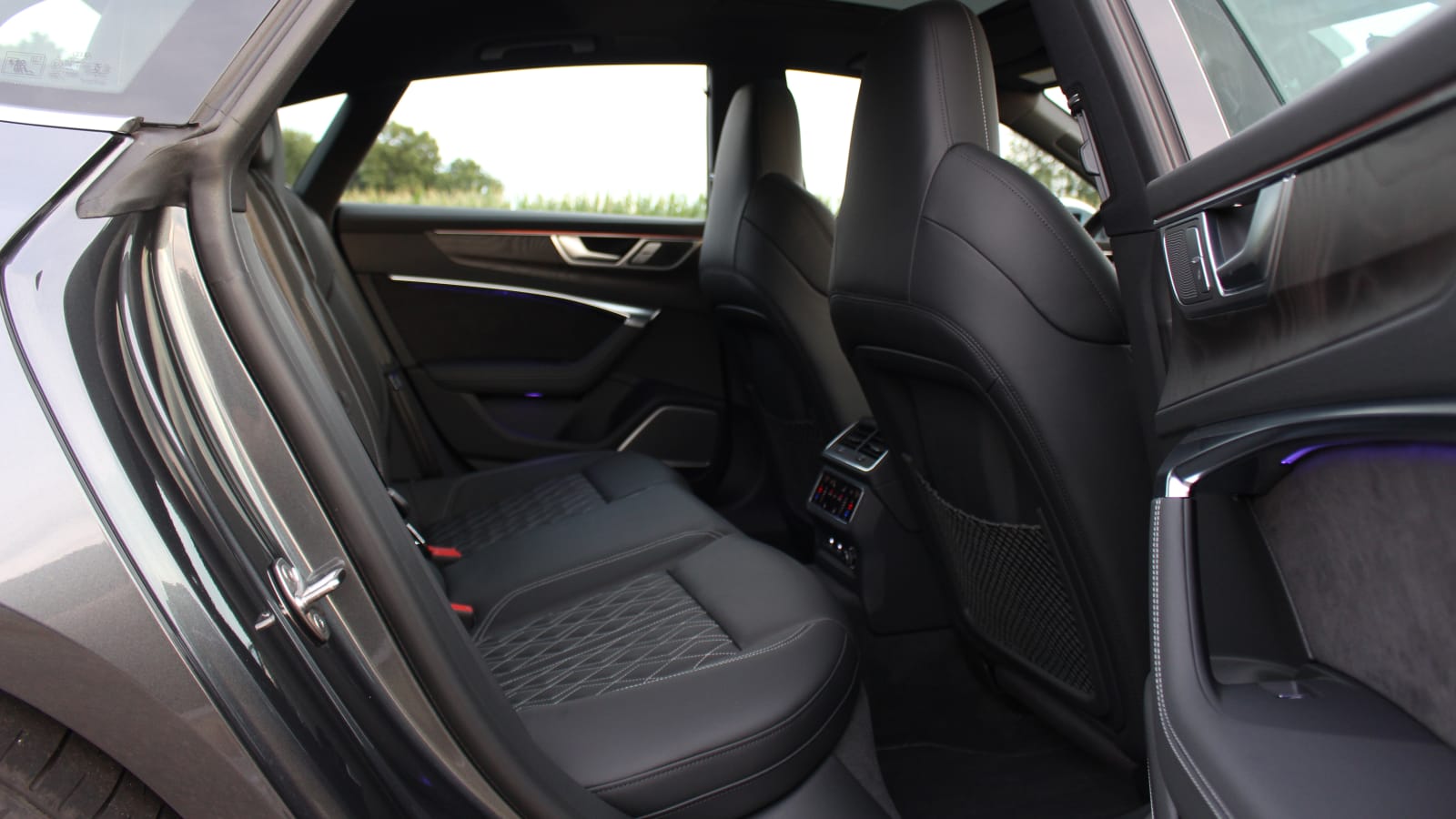 That shape is still helping it out in a practical sense, too. The S7 has 24.9 cubic-feet of space behind the rear seats, whereas the S6 (its sedan counterpart) makes do with just 13.7 cubic-feet. If maximum space is the goal in a car this size, nothing beats the new A6 Allroad’s 30 cubic-feet of space. Still, the compromise in luggage capacity in the S7 isn’t bad considering the wagon just edges it out.

Compared to an AMG or M Sport model, the S7 is tempered, coming off as a stately, luxury model in most circumstances. Even the steel suspension rides well over pavement. A wisping of wind noise from the mirrors enters the cabin at highway speeds, but twist the dial on the Bang and Olufsen audio system and everything disappears. It’s one of the most enjoyable listening experiences in any five-figure luxury car sold today. Everything you interact with and touch has a feeling of heft and quality, along with proper damping. This all contributes to making the car feel its asking price.

As you’d expect, the S7 is expensive, coming in at $84,495. Our fairly loaded tester skyrocketed the price up to $101,340. Audi makes every package so tempting that we’d struggle to say no to any of them. If pressed for cash, the $5,600 Prestige package could go, but we still want the S Sport package and Bang and Olufsen sound.

The biggest deterrent to going S7 is the massive discount you get for going with an S6. Most of the vitals are equal among the two, but the S6 is $10,000 cheaper. You have to love this body shape and plan on taking advantage of the extra boot space to pay that kind of premium. And even though the S7 looks spectacular, the BMW 8 Series Gran Coupe and Mercedes-Benz CLS-Class are striking in their own ways. That said, nobody else makes a car just like the S7 with its expansive cargo space; both the Mercedes and BMW have smaller trunks. Since it’s in a league of its own there, the S7 might just be the niche option for you. An AMG GT 53 4-Door Coupe and Panamera could make the final cut list, but they’re significantly more expensive than the S7 from the outset.

Swapping from the V8 to the V6 engine hasn’t ruined the S7 either. If you want a truly racy version of this car, the RS 7 is alive and well with 591 horsepower waiting in the wings. This middle ground is a sweet one that simply punches up the lovely and sedate A7 with a shot of personality.