Mazda has updated the 2021 Mazda CX-5 with a couple notable changes in the new model year. It’s the brand’s best seller by a longshot, and we think buyers of the 2021 car will like what Mazda has done.

The infotainment system is new this year, as Mazda has yanked its new screen and software out of the Mazda3 and CX-30 for duty in the CX-5. That means there’s a new 10.25-inch high-resolution widescreen sitting atop the dash, and the software it’s running is much improved over the previous Mazda infotainment. It’s also the end of the touchscreen, because Mazda has designed this new system to be exclusively operated by a rotary dial. Previously, you could operate the CX-5’s screen via touch if the vehicle was stopped. We prefer the new system greatly over the old interface, so this is a big upgrade. The new screen comes standard on the base Sport trim, and both Apple CarPlay and Android Auto are also standard.

Secondly, Mazda has added availability of more safety systems this year. Both rear automatic emergency braking and a driver attention monitor (alerts the driver when it senses fatigue or inattentiveness at the wheel) come standard on the Signature trim. For those who buy the Signature (or any trim with the 2.5-liter turbo engine), Mazda has added a new “Turbo” badge to distinguish the cars with the more powerful engines. 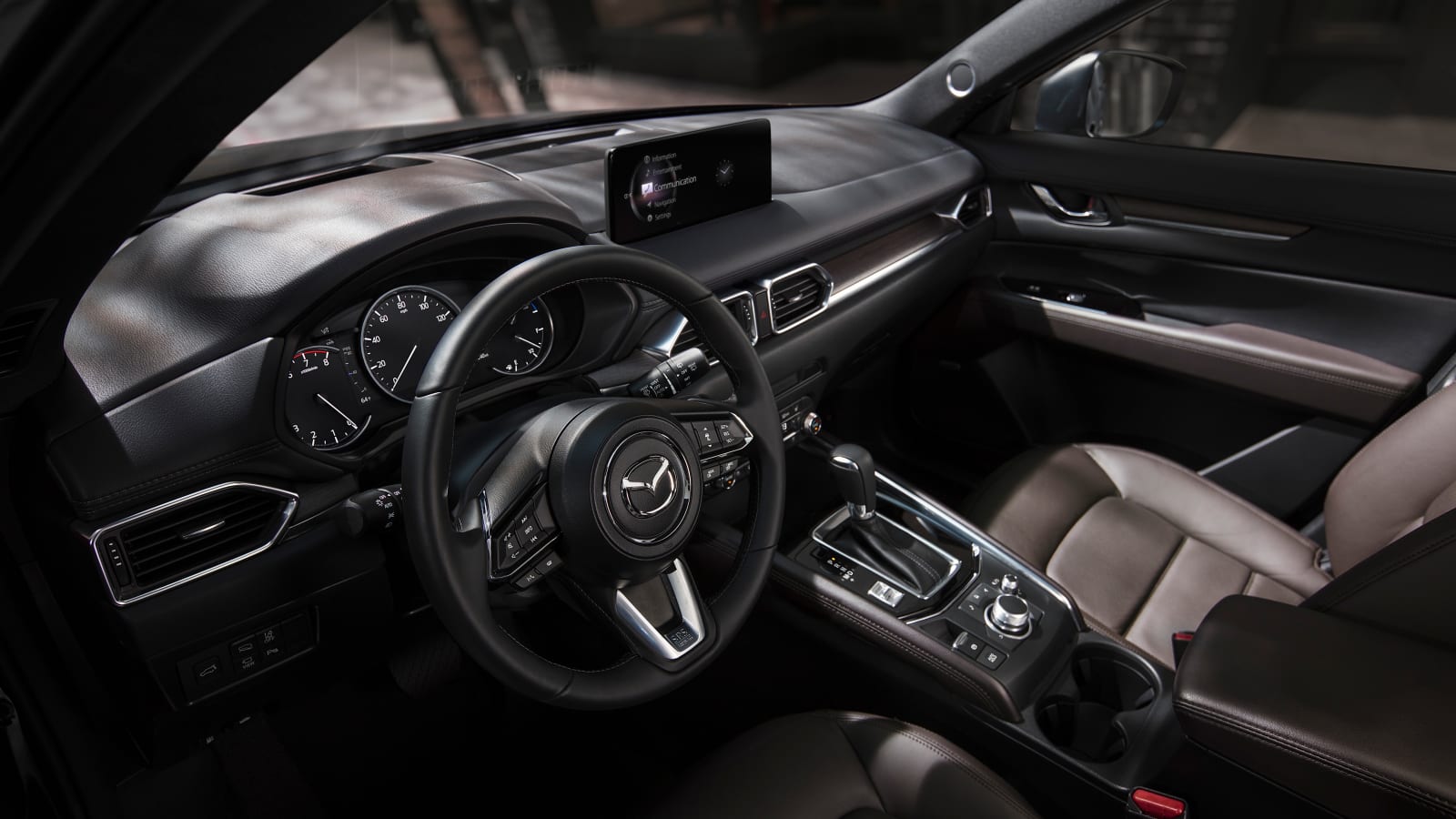 There are a couple trim/packaging changes for 2021, as well. The first we’ve already covered: the Carbon Edition. Two Carbon Edition models will be available; one has the turbo engine, and the other has the standard 2.5-liter four-cylinder. You get Polymetal Gray paint, gloss black trim on the exterior, 19-inch black wheels, red leather seats, red stitching and black honeycomb patterned interior trim. The second new trim package is called the Touring Preferred SV Package, and it costs $1,445. It fills the small gulf between the Touring and Grand Touring trims by stealing some of the features from the Grand Touring and splitting the difference on price. This package adds the Bose 10-speaker audio, leather seats, power liftgate, power moonroof, auto-dimming rearview mirror with Homelink, six-way power passenger seat and eight-way power driver’s seat with lumbar and memory.

Add $1,400 to get the price with all-wheel drive for every trim except for the Grand Touring Reserve and Signature — all-wheel drive is standard on those two top trims. It’s great to see the turbocharged engine at such a low price point compared to previous years — it’s also newly pairable with front-wheel drive. Thank the Carbon Edition, coming in $4,625 lower than the next cheapest CX-5 with the turbo engine.

We haven’t heard any news on whether or not the 2021 CX-5 will feature the diesel model, but we’ve put in a word with Mazda. Last we saw about the Skyactiv-D’s fate, it was MIA for the 2020 model year. Mazda says the 2021 CX-5 will begin to arrive in dealerships in September.

Update: Mazda responded and told us that it does not have any updates on the availability of the CX-5 Skyactiv-D diesel.