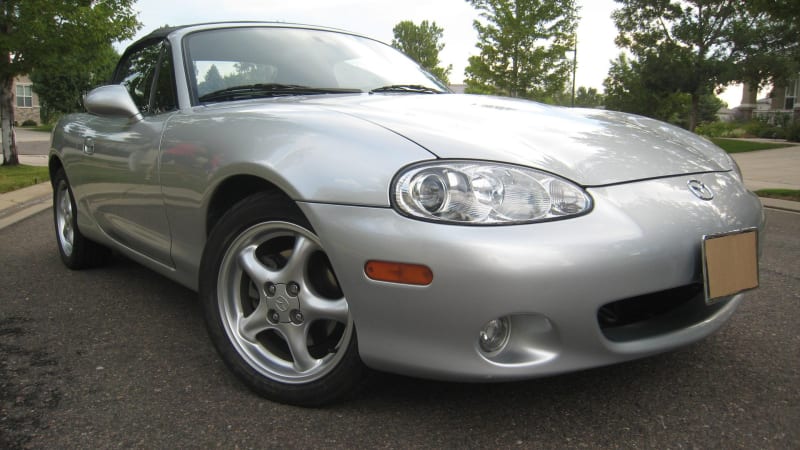 Pulling a 3.0-liter six out of a 2000 S-Type and dropping it into an unsuspecting Miata is apparently easier than it sounds. England-based Rocketeer offers a kit that makes the swap reasonably straightforward, though the listing notes the factory air conditioning system is not compatible with the new engine. Cold air aside, the installation is done so neatly that it looks like Mazda envisioned the Miata with a bigger engine. Jag’s V6 inevitably adds weight to a roadster praised globally for its nimble handling, but it also brings a whole lot of horsepower to the table.

Left stock, a 2002 Miata is powered by a 1.8-liter four-cylinder that makes 142 horsepower and 125 pound-feet of torque. The example listed on Cars & Bids puts 220 horsepower and 221 pound-feet of torque under the driver’s right foot, figures that easily offset the weight gain. And, somewhat surprisingly, the six spins the rear wheels through a stock five-speed manual transmission. Flyin’ Miata sway bars and Koni shocks improve handling.

Close the hood, and this Jagazda looks like a run-of-the-mill 18-year-old Miata. The seller made no modifications to the body, it’s still painted in its original shade of silver, and he kept the stock 15-inch wheels. The dual exhaust tips hint at the V6, but they’re subtle enough to surprise more than a few racers at the next autocross event.

The auction is live now, and bidding stands at $4,250 as of writing with about three days left before the hammer drops. If you miss your chance to bag it, several shops sell kits that let skilled shade-tree mechanics shoehorn Mazda’s K-Series V6 (which powered the MX-6 and the Ford Probe, among other cars) into an older Miata.