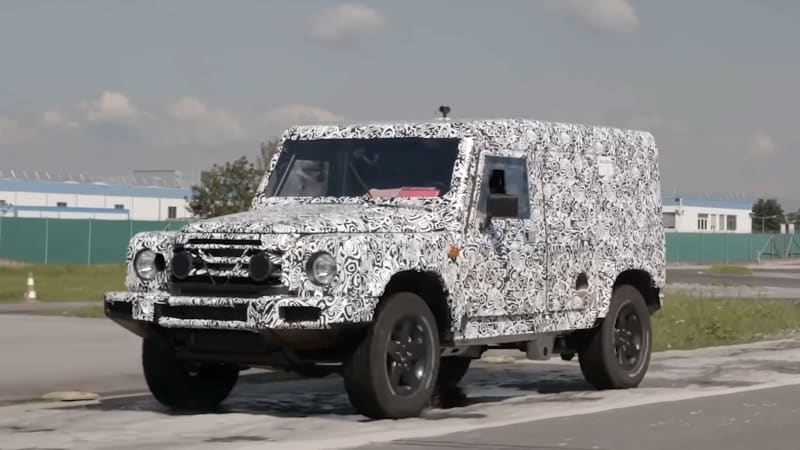 Just before Land Rover launched the new Defender, the automaker said the reborn icon had been put through 1.2 million kilometers of testing. We’re not sure if it’s Ineos ribbing the established competition, but the petrochemical-company-turned-truck-maker likes to stress that its Grenadier will be put through 1.8 million kilometers of testing before being released for sale to the public. That’s what’s happened (again) in the fifth video documenting the progress of the Grenadier, host Mark Evans hopping back to Austria for updates on calibration for the gas and diesel 3.0-liter BMW inline-sixes, the ZF eight-speed automatic transmission, and the bespoke transfer case.

Let’s get the bad news out of the way first: That ZF eight-speed auto will be the only transmission offered. The gearbox has a manual mode for those who know what they’re doing to choose the gear they want, but the development team decided against a manual because “the auto is the best option. It offers the full suite of functionality for the experienced drivers but also for the inexperienced drivers.” Hardcore old-school off-roaders are already heading for the door, we know. Yet there are plenty of workaday utilitarian types who have plenty of other things to do than worry about shifting gears. And in the U.S., Toyota hasn’t offered a manual Land Cruiser in donkey’s years, but you’ll hear few overlanders say a bad thing about it (well, about that part of it…).

We’re sure the choice of BMW engines made it easier to go exclusively with a ZF transmission (Toyota, again, did the same thing, eh?). We’re on the record as saying we’re looking forward to this vehicle, but — not to be cynics — we’re also looking forward to hearing the first stories of Grenadiers breaking down in the bush, because we want to know, 1. What breaks under hard yards, and 2. How easy it is to get parts for a modern BMW engine in the bush.

The two-speed transfer was drawn up from a blank sheet of paper and provides full-time four-wheel drive. High- and low-range and the differential lock are manually selected. Gearbox engineer Job Zwollow does say “diff lock,” singular; however, there will be a center diff lock standard on the Grenadier and locking diffs for the front and rear axles available as cost options. That info on the diffs comes from a Facebook Q&A Evans hosted to answer the enthusiast public’s questions, and it gets into arcane details such as articulation, trailing arms, and wheel bearings among many other things.

Over the next year or more, Ineos will build 100 vehicle prototypes and dispatch them around the world, working to avoid the aforementioned breakages, so there’s no telling what will change between now and 2023. The company’s still making all the right noises, though, with one of its engineers saying it’s “critical that this vehicle is simple and easy to maintain, which is why we’re avoiding any complexity that isn’t required to make this a workhorse utility vehicle.”