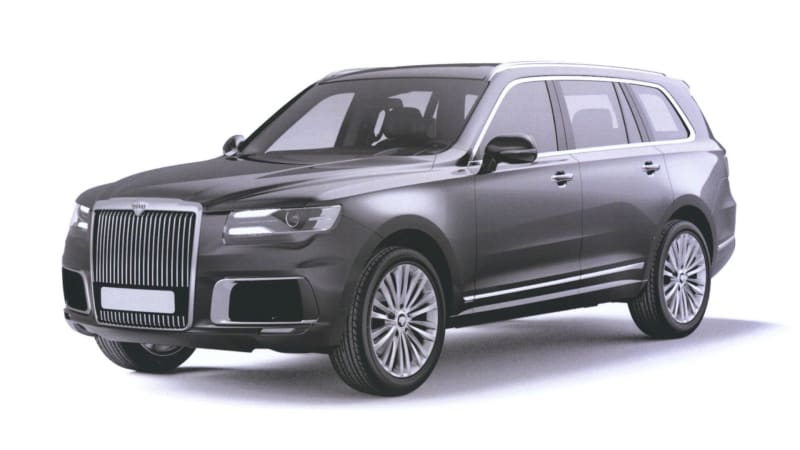 Russia’s upcoming entry into the booming mega-luxury SUV segment has been revealed ahead of schedule by leaked patent images. It’s made by Aurus, the firm founded to develop president Vladimir Putin’s limousine.

Ostensibly aimed at the Bentley Bentayga and the Rolls-Royce Cullinan, the Aurus Komendant wears a stately design characterized by horizontal, rectangular headlights positioned on either side of a tall, upright grille with vertical slats. It’s a design that borrows styling cues from the Senat, the aforementioned limousine, and that falls in line with the prototypes seen testing in the bitter Russian cold earlier this year. Spotted by Carscoops, the patents also reveal a long rear end that seems big enough for a third row, and horizontal rear lights.

Although technical details weren’t leaked, earlier reports confirm the Komendant is built on the same modular platform as the Senat. It was allegedly developed as a fully original platform with input from Porsche Engineering and Bosch. Like its sedan counterpart, it’s powered by a 4.4-liter V8 engine that’s twin-turbocharged to develop 600 horsepower. Rumors claim a V12 and a hybrid option will be offered later in the production run.

Interestingly, but not surprisingly, Aurus is also developing a motorcycle for government motorcades. Details are again vague at best, though it looks like there’s a battery pack — not an engine — between the rider’s legs.

Aurus planned to unveil the Komendant at the 2020 edition of the Moscow Auto Show, but the event was canceled due to the coronavirus pandemic. We don’t know when it will make its debut, though we likely won’t have to wait long to see it. Sales should start before the end of the year, and a price tag hovering in the vicinity of $300,000 wouldn’t be surprising considering the Senat starts at $274,000 before options enter the equation. Want one? Sorry, comrade, but you’re out of luck. Aurus has no plans to enter the American market in the foreseeable future.