Another Friday, another Wagoneer teaser — at least that seems to be the deal for August, anyway, and as we inch closer and closer to Jeep finally pulling the sheet of its new people-mover, its marketing team appears to be content with giving us just enough rope to hang ourselves.

Don’t believe us? Well, check out today’s teaser images for a couple of fine examples. The first appears to be a shot of the SUV’s grille, complete with “Wagoneer” badging; the second looks like a rotary dial for some sort of electronic system which, in today’s cars, could be anything from Jeep’s Selec-Terrain drive mode system to the transmission or simply an auxiliary infotainment knob.

That flashy knob thing doesn’t really get us anywhere, but the grille-and-badge shot has us curious. Why? Well, note the way the lighting changes behind the letters in “Wagoneer” relative to the rest of what we presume is the leading edge of the hood. This seems to indicate an indentation of some kind.

Why is this noteworthy? Well, if the badge is going to read “Grand Wagoneer,” would it not logically follow that the indentation would begin left of the “G” in “Grand”? Sure, there could be separate indentations for “Grand” and “Wagoneer,” but they’d either have to be different-sized indentations, or the tracking (the spacing between the letters) in the word “Grand” would have to be significantly larger than that in the word “Wagoneer.” Either would look quite strange. 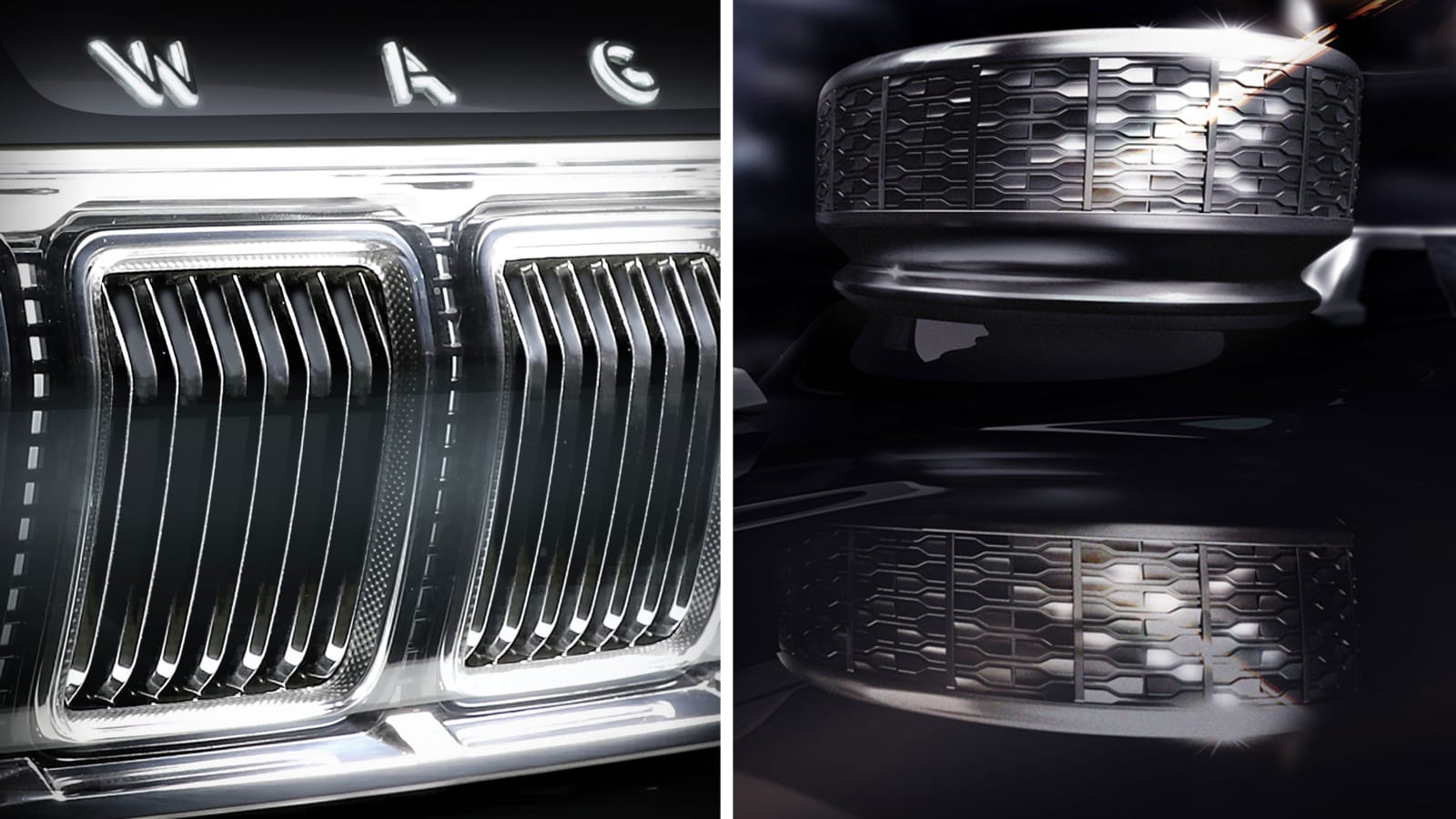 There are other possibilities as well. The lettering could be two-tiered, with “Grand” sitting above “Wagoneer” and out of frame, or Jeep may simply omit “Grand” from its exterior badging altogether. If anything, this shows us just how little we really know about Jeep’s new Wagoneer lineup.

Will Wagoneer/Grand Wagoneer have a relationship similar to Chevy’s Tahoe and Suburban nameplates, meaning they denote different wheelbases? Or will “Grand” be more like GMC’s “Denali,” which is merely a more luxurious trim of the same truck? Or, could we turn the whole pattern on its ear? Could “Wagoneer” simply denote a three-row model, meaning we could see a Grand Cherokee Wagoneer and a Grand Wagoneer, based on the 5- and 6-lug prototypes, respectively? Jeep product history gives us precedent for both.

At the end of the day, the one thing that ties it all together is Jeep’s heavy use of a vintage Grand Wagoneer in its recent teasers, so we have to assume that we’re looking at a Grand (capital “G”) Wagoneer concept here, but, hey, speculation is fun, right?